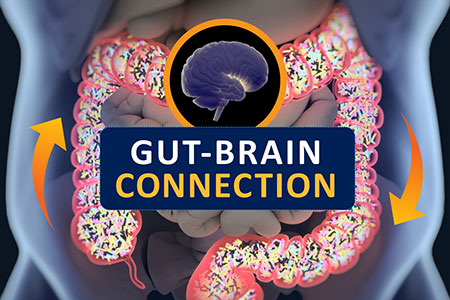 Connections between behavioral phenotypes and the microbiome continue to emerge from fecal microbiota transplantation (FMT) studies at McMaster University.

Can Behavioral Phenotypes Be Transferred?

Researchers at McMaster University first demonstrated the transfer of behavioral traits between mice via the gut microbiome by fecal microbiota transplantation (FMT) in 2011.

Independent of the GF recipient strain or stock, the mice receiving the microbiota from the BALB/c mice displayed an anxious behavioral profile compared to the mice transplanted with the less anxious NIH Swiss microbiota1.

This demonstrated that behavioral phenotypes — specifically anxiety — were at least partially influenced by gut microbiome composition, in that phenotypes could be transferred between mice via FMT. Was there a possible application to the study of human phenotypes?

In a freshly published paper, the McMaster University group has now shown that the anxious phenotype can also be transferred by FMT from humans to mice2.

In order to evaluate functional roles of the microbiome in irritable bowel syndrome (IBS), the authors colonized GF mice with fecal microbiota from either healthy control individuals or diarrheic IBS patients (with or without the comorbidity anxiety). The researchers found that mice receiving microbiota from IBS patients had increased gastrointestinal transit time — perhaps a reflection of diarrhea in the patients.

More interesting, however, was the marked change in measurable anxiety in mice receiving transplants from donors with IBS and comorbid anxiety. When subjected to anxiety-assessing behavioral tests, these mice displayed significantly increased anxiety behavior when compared to mice with healthy control microbiota or to mice with microbiota from IBS patients without anxiety. Specifically, they displayed increased latency time in the step-down test and decreased light preference in the light-dark box test.

These results suggest that the microbiota may contribute to development of anxiety, which is observed as a comorbidity in many IBS patients. As such, pre-/probiotics or other microbiota-targeting therapeutic strategies may be beneficial for IBS patients — not only for alleviating the intestinal manifestations, but also for mood symptoms.

Further, if an anxiety phenotype can be transferred from humans to mice, it's possible this is also the case between human donors and recipients of FMT. It can therefore be argued that screening programs for FMT donors used in the clinic should include mood disorders as an exclusion criterion.