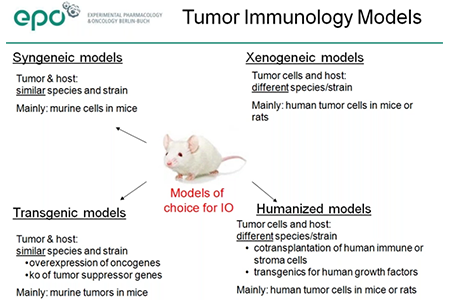 Dr. Jens Hoffmann of EPO presented a webinar highlighting new data on preclinical immuno-oncology research using humanized models. The growth in immuno-oncology (IO) research has created a need for more relevant models. The IO field includes many types of drugs, including:
Relevant in vivo models are needed to study all of these IO modes.

Standard xenograft models, in which a human tumor is transplanted into an immunodeficient host, have limited utility for IO studies, as the appropriate immune cells are not present in the host. The current models of choice for IO research include:

Learn more about preclinical immuno-oncology animal models and Read the Taconic Biosciences' Insight:
EPO has significant experience in syngeneic models, with a large panel of established tumor cell lines characterized for response to checkpoint inhibitors. They are now evaluating combination therapies (immune therapy + radiation) in these syngeneic models, including evaluating the immune cell infiltration into tumors after radiation treatment. 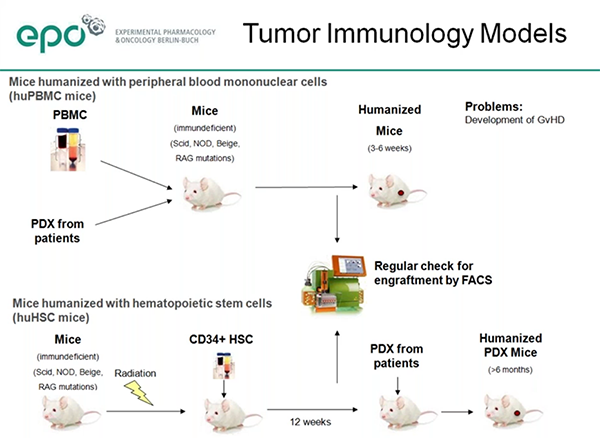 Dr. Hoffmann described use of both primary types of humanized immune system mice, those engrafted with human PBMCs and those engrafted with human CD34+ hematopoietic stem cells (HSCs). The PBMC model (huPBMC-NOG) is well-established and quite useful, but the study window is limited as the mice eventually develop graft versus host disease. The HSC model (huNOG) takes longer to get sufficient human cell engraftment and differentiation, but has the advantage of a longer useable study window.

For studies requiring human NK cells, Dr. Hoffmann explained that the recently developed hIL-15 NOG mouse may be more suitable than the base NOG mouse. Following engraftment of human PBMCs, the hIL-15 NOG mice had higher engraftment of T cells compared to NOG mice, and also showed significant numbers of NK cells, which do not develop appreciably in NOG mice.

The huPBMC model is appropriate for study of the many types of IO therapies, including:

Dr. Hoffmann discussed a number of studies performed by EPO in which patient-derived tumors were engrafted on NOG mice which had also been humanized with HSCs. Some tumor types grew equally well in mice with and without HSCs, whereas the growth of other tumors was slowed in HSC-engrafted mice compared to non-humanized mice. In some cases, this was a donor effect, in that the growth characteristics of the same tumor varied between mice humanized with different donor HSCs.

Dr. Hoffmann showed validation data demonstrating efficacy of checkpoint inhibitor therapeutics against PDX in HSC-engrafted mice. He did caution that, because of donor-to-donor variability in both tumor growth and response to immunotherapies, it is important to use multiple HSC donors in each experiment.

In the PBMC model, the tumor grew similarly in mice humanized with the patient's autologous PBMCs and from two of the three unrelated donors, but the tumor grew much faster in the mice engrafted with one particular donor's PBMCs which happened to be well HLA-matched to the tumor.

Dr. Hoffmann indicated that the variability in tumor growth and in drug efficacy across different immune cell donors may be a window into understanding drug mechanisms of action and may even help tease out why some patients respond well to these new therapies while others show no response.