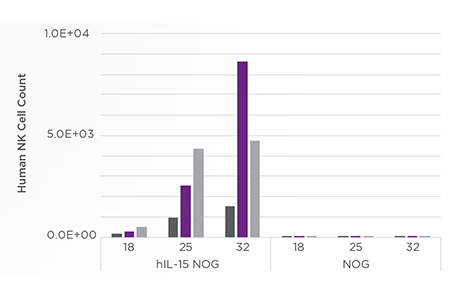 Investigators from the Central Institute for Experimental Animals (CIEA) are credited for development of the super-immunodeficient CIEA NOG mouse® and its human cytokine-expressing variants, hIL-2 NOG and hIL-15 NOG.

In previous work, CIEA scientists reported both hIL-2 NOG and hIL-15 NOG models could support the development of human NK cells from engrafted human hematopoietic stem cells (HSCs). Compared to the HSC engraftment approach, a PBMC model with sufficient NK-cell engraftment could provide a cost-effective and efficient alternative for in vivo studies of human NK cells and therapeutic human antibodies.

To determine the suitability of PBMC-engrafted hIL-2 NOG and hIL-15 NOG for NK-cell investigations, EPO and Taconic scientists designed a study comparing immune system reconstitution from PBMCs in both transgenic models to conventional NOG mice.

NOG, hIL-2 NOG, and hIL-15 NOG mice were engrafted with several doses of a single donor's PBMCs, then peripheral blood immune cell reconstitution was evaluated in each model over time. Because T-cell-mediated graft vs. host disease (GvHD) limits effective study windows in PBMC models, the onset of GvHD was also monitored and served as a primary consideration for model suitability. 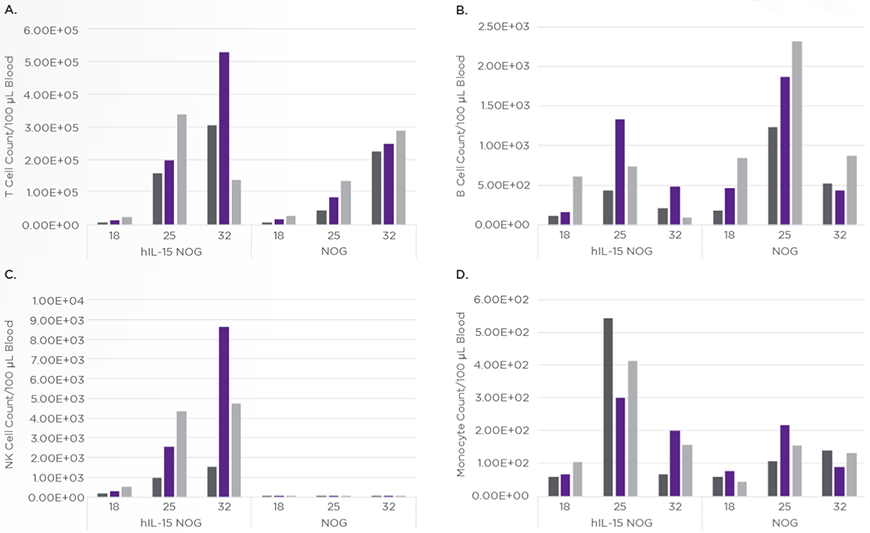 PBMC-engrafted hIL-15 NOG mice had a slightly diminished survival compared to conventional NOG mice, but did survive up to seven weeks after PBMC engraftment without any signs of GvHD (Fig.1). The shorter time to GvHD onset was associated with slightly higher rates of T-cell reconstitution (Fig. 3a).