Which Mouse Is the Best Mouse?

Importantly, all immunodeficient models have strengths and limitations. There are certainly situations where an alternative model would be a more suitable host. If you're not sure which model is best for your study, the linked resources below may help guide your decision — or you can contact us for help.

Want help selecting a host or designing your study?


Strengths and Limitations of PBMC-engrafted Mice

HuPBMC-NOG mice provide functional human immune cells immediately upon engraftment, from a readily available source. In contrast, huNOG mice, a comparable HIS model, develop functional immune cells over three-to-four months, following engraftment of CD34+ hematopoietic stem cells (HSCs). HSC's are much harder to source than PBMCs, as they are typically purified from human umbilical-cord blood. Thus, huPBMC-NOG mice are not only faster and easier to produce than HSC-engrafted models like huNOG, they're also significantly more cost effective. The strengths and limitations of huPBMC-NOG are summarized in Figure 1. The major distinction between immune cells in huNOG vs. huPBMC-NOG is rooted in their developmental origins. Immune cells in huNOG develop within the mouse and recognize the host as self, whereas immune cells in huPBMC-NOG mice developed in a human and recognize their murine host as foreign. Accordingly, human T cells become activated and expand in huPBMC-NOG to mediate lethal graft-vs-host disease (GvHD), typically within 4-5 weeks of engraftment. GvHD is the major limitation of PBMC models because it limits the effective study window and can confound interpretation of data at later stages of the study.

Study design is influenced by the properties of the bispecific therapeutic being tested. Additionally, experimental parameters in PBMC models tend to be constrained by the short timeline provided prior to GvHD onset. Furthermore, because PBMC-engrafted NOG mice have been leveraged substantially in prior evaluations of T cell-targeting bispecifics, there are generalities that can be made to guide the design of similar studies.

Table 1 summarizes the preclinical study design for various T cell-engaging bispecifics. These studies have been combined in Figure 2 to produce a representative-study design for evaluating similar bispecifics in models like huPBMC-NOG.

Summary of preclinical studies of bispecific therapies in PBMC-engrafted mice 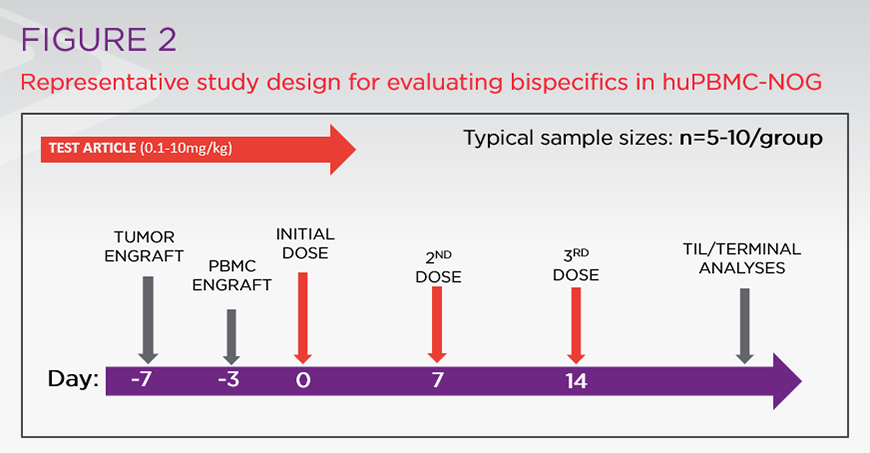 When to engraft cancer cells

Engraftment of cancer cells typically occurs prior to engraftment of PBMCs. This approach has been preferred because study windows tend to be limited by GvHD onset as opposed to terminal cancer progression. Prior to running experiments with PBMCs, it's recommended to run a small pilot to establish take rate and growth kinetics for the chosen xenograft model.

The best time to engraft PBMCs

After establishing take rate and growth kinetics for the chosen xenograft model, the data can be used to determine a metric that identifies sufficient cancer engraftment (e.g. tumor size) for the introduction of human PBMCs. This is a suggested approach, not a rule. As noted for the CEA TCB bispecific, which was evaluated with simultaneous cancer cell and PBMC engraftment, successful results can be obtained without first establishing the cancer. Understanding how your chosen cancer line performs in NOG mice, or any other host you select, will help you determine PBMC timing most suitable for your work.

How many PBMCs to engraft and by what route

The tail vein is the most common route for PBMC engraftment. Intraperitoneal injections also work, but tend to be less efficient. Typical PBMC doses are in the range of 5-10 million cells, with higher cell doses accelerating GvHD onset. Importantly, the timing of GvHD onset can vary dramatically across different PBMC donors. Spreading multiple donors across a study or pre-screening your PBMCs in the host model are viable approaches to diminish negative outcomes associated with donor variability.

The timing of GvHD onset can vary dramatically across different PBMC donors and may be the most important variability factor to consider. However, the inherent inter-donor variability associated with primary human cells should not be overlooked — especially if experimental anomalies are observed.

Spreading multiple donors across a study and pre-screening your PBMCs in the host model are viable approaches to diminish negative outcomes associated with donor variability. If pre-screened PBMCs from a single donor are used within a study, ensure replicate studies use cells from different donors.

For IND-enabling studies, all aspects of dosing should be guided by appropriate pharmacokinetic data. In the representative examples, bispecific therapies were delivered by I.P. or I.V. routes at doses that ranged from less than 0.01mg/kg to over 10mg/kg. Though weekly dosing was clearly the preferred strategy in the representative studies, these bispecifics tended to have relatively long half-lifes (most around four-to-six days) as established in murine PK studies.

For bispecifics with less-favorable PKs, a more frequent dosing strategy may be warranted.

Ideally, a study using huPBMC-NOG mice will deliver important data and conclude prior to any visible manifestations of GvHD. However, even for studies that conclude well before GvHD onset, it's important to understand that GvHD may still contribute to results.

For bispecifics that redirect T cells to a tumor, efficacy is expected to be associated with increased human T-cell infiltration. These infiltrating T cells may already be activated in PBMC-engrafted models through mechanisms related to non-self-recognition and GvHD. This means any therapy that increases xenograft T-cell infiltration could lead to inhibition of tumor growth through non-specific activity of infiltrating T cells.

While at first glance, this non-specificity may seem like a major drawback to PBMC models, but an efficacy result in huPBMC-NOG is still incredibly favorable. At the very least, it indicates the candidate therapeutic has appropriately engaged two human-target epitopes, on two human cell populations, in vivo.

Turning GvHD into a Strength

Researchers can remove GvHD as a confounding factor in their study by using an alternative HIS model that doesn't manifest GvHD, such as huNOG mice. However, for an increasing number of advanced bispecifics that are engineered to avoid T-cell activation in the periphery, GvHD can actually be leveraged as a strength in the model. An example of this can be found in data from Pieris Pharmaceuticals' evaluation of their T-cell bispecific, PRS-343.

To help localize T-cell activation within the targeted tumor, Pieris designed PRS-343 to activate T cells only when bound to HER2, their tumor-specific epitope. In toxicology studies, Pieris used huPBMC-NOG mice to compare PRS-343 to a benchmark monoclonal antibody (mAb) targeting 4-1BB, the same T-cell epitope targeted by PRS-343.

As bispecific immunotherapy efforts shift their focus beyond T cells, next generation humanized immune system models are being leveraged to overcome the shortcomings of traditional PBMC-engrafted mice. These advanced HIS models can support longer study lengths and broaden the assortment of engraftable human immune cells.

The following resources will help you learn more about advanced HIS models: