AcceptShow Options
NEW MODEL: Jh mouse on B6 background Learn More
eTACONIC
Caroline Horizny, PhD
Tuesday, November 19, 2019
Facebook  Twitter  Linkedin  print  rss
CRISPR/Cas9 is an extremely useful tool for both academic and commercial researchers. It is also widely used in the generation of custom mice and rats from licensed animal model vendors. However, there are multiple patents covering this technology and understanding the differences between them is essential before utilizing CRISPR/Cas9 for model generation. This Insight will focus on two key CRISPR/Cas9 patents and how they have influenced model generation by both not-for-profit and commercial entities.

As shown in the figure below, there are five inventors listed on the two key CRISPR/Cas9 patents. Emmanuelle Charpentier, Jennifer Doudna, Martin Jinek, and Krzysztof Chylinski are all listed as inventors on patent No. 10,000,772 titled "Methods and compositions for RNA-directed target DNA modification and for RNA-directed modulation of transcription." Under Swedish law, Charpentier was not obligated to assign ownership to her associated institution, the University of Umea, and, therefore, retained ownership herself. However, all other inventors were obligated to assign ownership to their associated institutions. Feng Zhang is the sole inventor listed on patent No. 8,697,359 titled "CRISPR-Cas systems and methods for altering expression of gene products." The resulting owners of these two patents include Charpentier, the Regents of the University of California, the University of Vienna, and the Broad Institute Inc., Massachusetts Institute of Technology. Together, these owners have granted exclusive licenses to subsidiary companies which can provide non-exclusive licenses to additional commercial companies. 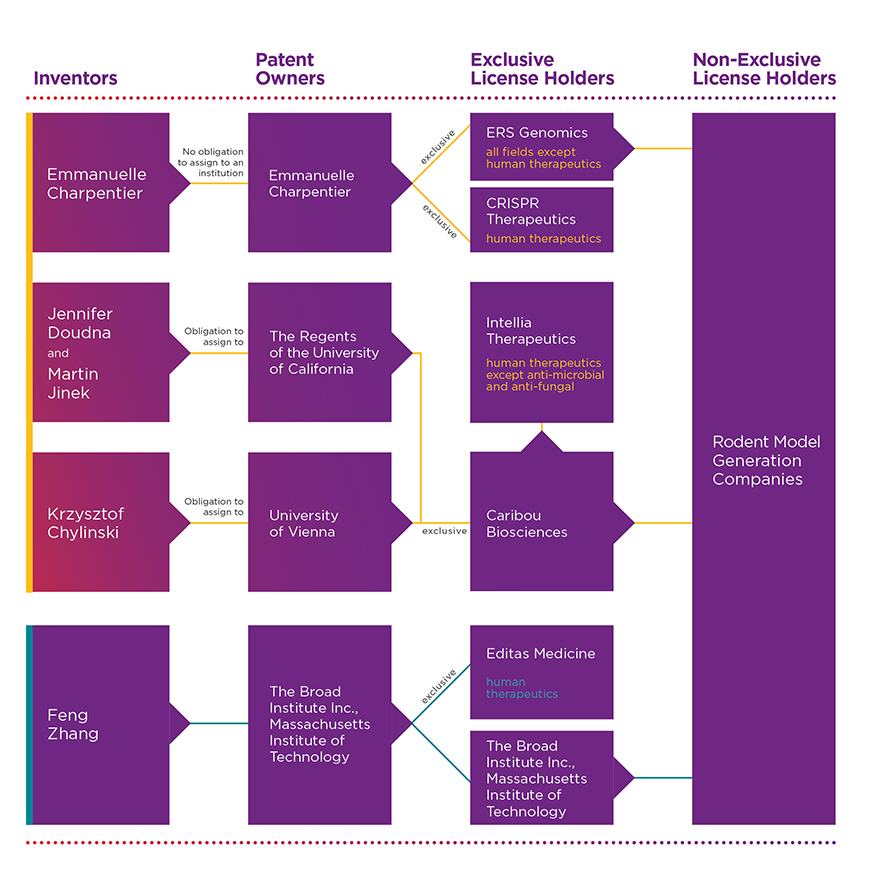 Depending on the type of entity using CRISPR/Cas9 for the generation of custom mice and rats, there are different requirements concerning the licenses that need to be obtained. The Broad Institute permits not-for-profit researchers to generate custom mice and rats using CRISPR/Cas9 without obtaining a license to their patent portfolio. However, if a researcher intends to commercialize their model, they will need to secure a license to one or more patents. The Uniform Biological Material Transfer Agreement (UMBTA) enables genetically engineered models to be transferred between not-for-profit institutions and government agencies without requiring any patent licenses as long as there is no intent to commercialize the model. However, utilizing CRISPR/Cas9 in any commercial setting requires licenses to one or more patents.

When deciding whether to design your own CRISPR/Cas9-modified mouse or rat, it is worthwhile to consider purchasing from an established model generation company that is fully-licensed to utilize the technology. Reports often imply that CRISPR/Cas9 is an "easy alternative" to traditional genetic engineering methods. However, since all projects require custom modifications, experienced PhD scientists with extensive knowledge and resources are essential for the success of any CRISPR/Cas9 model generation project.