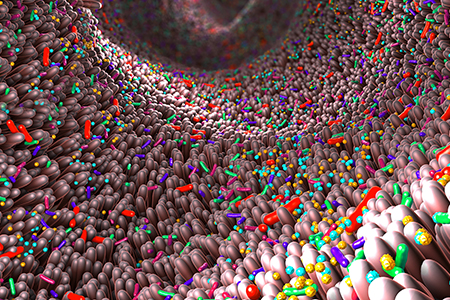 It is well documented that the microbiome can impact both the development of disease and the efficacy of therapeutics. The microbiome also is consistently cited as a significant contributor to preclinical study variability and reproducibility, in part due to its effects on a mouse model's predictability. With a strong incentive to better understand the role of the microbiome in disease development and treatment, the research community continues to seek novel models that leverage the microbiome in ways that increase study reproducibility and translatability. Associating germ-free mice with defined microbial compositions is one approach that is helping investigators achieve this goal.

Germ-free mice (those devoid of any detectable microorganisms, including bacteria, fungi, parasites, and viruses, with the exception of endogenous viral elements) are ideal hosts for transplanting microbial communities and evaluating their properties. However, even these suitable hosts have limitations when it comes to studying the mechanism of the microbiome. Germ-free mice have an altered metabolism, creating special nutritional requirements, as well as altered intestinal motility and structure and a less-developed mucosal immune system in the gut1. They also exhibit altered behavioral profiles and altered brain physiology and structure2.

It is possible to avoid these effects by transplanting germ-free mice with the microorganism(s) of interest and using their offspring — who have microbiota transmitted in a natural way from birth3 — in studies. This approach enables custom microbiome profiles to be created and maintained in mice throughout generations (using proper gnotobiotic husbandry techniques), thereby limiting unwanted microbiome changes that may impact study reproducibility.

The use of defined microbiome profiles to evaluate therapeutics in research models is a burgeoning, albeit relatively new, field. The most common techniques include using live microbiota-based therapeutics — often called "bugs as drugs" — and developing small molecules derived from the microbiome or used to target the microbiome. Germ-free models can play a critical role in advancing these endeavors. A germ-free model associated with a defined, minimal bacterial community enables investigators to evaluate therapeutic candidates in a model of disease that requires microbiota present — for example, spontaneous colitis in an interleukin-10 deficient mouse.

Oligo-Mouse-Microbiota (Oligo-MM12), a community of 12 strains representing members of the major bacterial phyla in the murine gut, is another microbial composition that is proving useful in evaluating how the microbiome influences disease development and therapeutics6. For instance, Oligo-MM12 was shown to be stable over consecutive mouse generations and provided a level of colonization resistance against Salmonella enterica serovar Typhimurium.

Dr. Alexander Maue, Scientific Program Manager, authored an article on leveraging the microbiome and defined microbiome profiles to develop new research models in International Biopharmaceutical Industry:
As efforts to improve the health of lab mice have accelerated, many organisms deemed as pathogens have been eliminated from these mice, resulting in the removal of some beneficial or commensal organisms. Now, the microbiomes of lab mice appear to differ significantly from those present in wild-type mice. Given the pressing need to improve mouse model predictability and preclinical study reproducibility, investigators are looking to wild-type mice to enhance their understanding of the microbiome's role. The work of researchers at the National Institute of Digestive Diseases and Kidney Diseases (NIDDK), part of the United States National Institutes of Health (NIH), has helped to advance this effort.

NIDDK investigators created a model they termed "wilding mice"7, using live wild mice (caught at eight locations across Maryland and the District of Columbia in the US) as surrogate mothers in a rederivation. They transferred pathogen-free gut microbiota samples from these wild mice into timed-pregnant germ-free C57BL/6NTac mice from Taconic Biosciences, with the resulting mice harboring the natural microbiota of wild mice. Introduction of the wild-type microbiome at this stage ensured that the offspring were exposed to the defined microbiome in utero, during birth, and until weaning.

The researchers hypothesized that these wildling mice would better reflect the human state because they had a more diverse microbial composition, similar to wild mice that are exposed to a variety of organisms throughout their lives. Specifically, they expected the mice to demonstrate important symbiotic host-microbe interactions that impact immunity.

When both the germ-free B6 mice reconstituted with the wild mouse microbiota and a group of control mice were exposed to two challenges, interesting results were observed. When infected with influenza A virus (IAV) mouse-adapted A/PuertoRico/8/1934 H1N1 strain (PR8), only 17 percent of the germ-free B6 mice survived vs. 92 percent of the wild mice, with the latter demonstrating higher levels of anti-inflammatory cytokines and lower levels of pro-inflammatory cytokines. When a second cohort was exposed to mutagen- and inflammation-induced colorectal cancer, the wild mice developed a much lower amount of colorectal tumor (and less invasive tumors) than the control mice8.

The NIDDK researchers also used these wildling mice to replicate the evaluation of CD28 superagonist TGN14129, which had previously failed to transition successfully from preclinical research to clinical trial. Whereas TGN1412 activated and expanded regulatory T cells with therapeutic effects in preclinical studies, its administration in clinical trials resulted in serious adverse events, including multi-organ failure caused by a storm of pro-inflammatory cytokines10. The NIDDK investigators tested TGN1412 in both lab mice and wildling mice, observing the same activation and expansion of regulatory T cells that occurred in the original preclinical characterizations7. However, when CD28 superagonist was tested in wildling mice, high levels of pro-inflammatory cytokines were observed, which is consistent with the experience in the original clinical trial. In this case, altering the microbiome of the B6 mouse enabled the researchers to create a model with greater predictability and better disease resistance. Further studies conducted by Taconic scientists demonstrated that the microbiome from wildling mice remained intact through multiple generations of breeding.

The microbiome's impact on human health is potentially significant, as it has been linked to nearly every therapeutic area and demonstrated to have an effect on study reproducibility. Researchers are increasingly evaluating the ways in which the microbiome can alter how a disease develops and progresses and a how a therapeutic intervenes. Defined microbiome profiles, such as the wild-type microbiome, enable the development of novel models that can help drive this microbiome discovery work and improve the reproducibility of preclinical studies.

2. Luczynski, P. et al. Growing up in a Bubble: Using Germ-Free Animals to Assess the Influence of the Gut Microbiota on Brain and Behavior. Int. J. Neuropsychopharmacol. 19, pyw020 (2016).