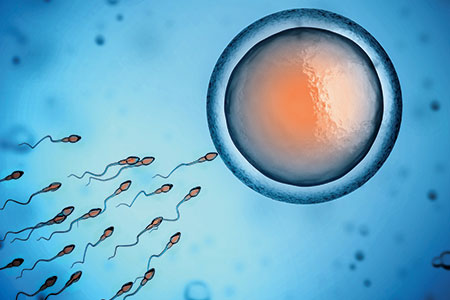 Until recently, cryopreservation of two-cell stage or later stage embryos was the predominant method for preserving lines of laboratory rodent models. The methodology is relatively simple and does not require expensive laboratory equipment or a thorough understanding of rodent reproductive biology. Prior to the advent of in vitro fertilization (IVF), the embryos were usually generated by natural mating, then harvested from the oviduct (two-cell) or uterus (blastocyst) between one and four days after mating.

The development of IVF made the generation of the embryos less dependent on natural mating and hence much easier to scale to larger numbers. Still, the cryopreservation methodologies have remained largely the same.

Another unique application of embryo cryopreservation is during a backcross breeding program, in which embryos from each generation of the backcross can be cryopreserved in the event one wishes to return to a specific generation for further study.

Controlled-rate freezing typically involves equilibration of embryos in 1-2 M solution of permeable cryoprotective solutions —such as propylene/ethylene glycol, DMSO or glycerol, and then cooling to -35°C or -70°C at a slow and constant cooling rate using a controlled-rate freezer. The straws/vials holding the embryos are plunged into liquid nitrogen for long-term storage.

The cryoprotectants used in controlled rate freezing are intended to prevent intracellular crystallization by osmotic dehydration of freezable water, and replacement of intracellular water with cryoprotective solution.

The degree of dehydration depends upon the duration of cooling or the temperature reached before plunging the embryos into liquid nitrogen. The type of cryoprotectant and rate of cooling determines how the embryos should be thawed.

Typically, embryos cooled to -70°C or below are highly dehydrated and should be thawed slowly to allow complete rehydration of the embryos. In contrast, embryos cooled to -35°C are only moderately dehydrated, and should be thawed more rapidly. A lack of appreciation to these details is often the cause of failure in cryorecovery of the material months and, even years later.

Vitrification is typically achieved by placing the embryos in a very high (5-6 M) concentration of cryoprotective solution, followed by rapid cooling (>2,000°C/ minute) in liquid nitrogen.

Vitrification relies on the ability of highly concentrated aqueous solutions of cryoprotective agents to supercool to very low temperatures. At sufficiently low temperatures, the solution becomes very viscous so that it solidifies into amorphous glass state without the formation of ice crystals.

In contrast to controlled-rate freezing, embryos in this procedure are not equilibrated with the cryoprotectant but are partially dehydrated, therefore vitrification is also referred as a non-equilibrium procedure.

Rapid cooling requires rapid warming for recovery of vitrified embryos with high survival rates. Since rapid cooling and warming are critical for survival of the embryos, embryos are typically vitrified in a small volume of cryoprotective solution.

The viability of cryopreserved embryos post thaw is determined by a combination of biological (strain/genetic background) and technical (protocol, media quality, technician skill) factors. Regardless of the level of experience and technical skill, some attrition in the recovery of viable embryos at thaw and the number of embryos that will result in live born offspring upon transfer should be expected.

In general, one should estimate that 20-25% of frozen thawed embryos will produce live offspring.

Therefore, we recommend preserving sufficient embryos to re-establish a given line a few times before an additional cohort of embryos would need to be cryopreserved. In general, this is between 100-300 embryos. Taconic Biosciences cryopreserve 250-300 embryos per rodent model. Biological activity in cells ceases below -130°C. Assuming proper storage in liquid nitrogen, cryopreserved embryos are theoretically viable forever6.

Frozen embryos stored in liquid nitrogen tanks exposed to background radiation equivalent to 2000 years had no impact on the survival of embryos at thawing, or their development potential to live offspring6.

Most Popular In Cryopreservation