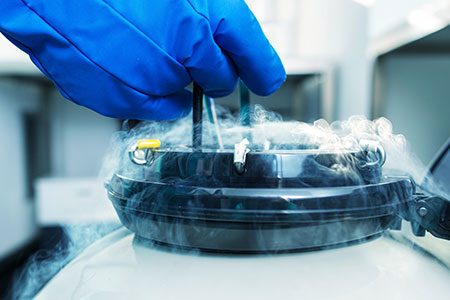 Use of genetically engineered rodent models in research requires the lines to be maintained in continuous breeding, which is costly, labor intensive, and takes up limited vivarium space. Also when such colonies are the sole source of the model, there is risk of losing the line altogether to unanticipated death, disease, infertility, genetic drift, or microbial contamination.

Effective use of cryopreservation allows researchers to better utilize financial and physical resources, while securing valuable lines from catastrophic loss.

Cryopreservation preserves structurally intact, living cells and tissues for storage at very low temperatures. The most common format for cryopreserving laboratory rodent models is to preserve and store embryos or sperm in secure liquid nitrogen storage. These methods are well-established and proven, allowing for easy recovery of valuable strains when needed.

This is the first of a four-part series on the effective use of cryopreservation in maintaining genetically modified mouse and rat lines:

Although the potential of cryopreservation was recognized as early as the 17th century, cryopreservation of living cells had invariably resulted in lethality until a mislabeled reagent bottle led to the discovery that freezing chicken sperm in a solution of glycerol preserved their viability1.

The accidental discovery of 'cryoprotective agents' kick-started the field of cryobiology and the cryopreservation of sperm and embryos in a variety of species. Cryopreservation of mouse embryos was first reported2,3 in the early 1970s and was quickly recognized as a cost-effective tool for colony management and distribution of mouse stocks4.

Advances in genetic engineering and genome editing technologies resulted in the generation of thousands of genetically engineered mouse and rat models. These mutant lines are generated with great excitement and passion, and researchers often prefer to maintain live breeding colonies to secure their investment.

However, the limited resources and space, coupled with the potential risk for catastrophic loss, should often motivate researchers to cryopreserve valuable rodent lines.

Here are six reasons why cryopreservation should be part of any well-designed colony management program:

To reduce costs, researchers often choose to shrink the size of a breeding colony when demand for the line is low. However, even at five-to-eight cages per line, these small maintenance colonies can accumulate and absorb considerable resources for effective management.

More Efficient Use of Vivarium Space

The exponential growth of the use of rodent models in pre-clinical research over the last decade is outpacing vivarium capacity. The accumulation of several "maintenance" breeding colonies in a vivarium can quickly eat up precious space, leaving less space to support active research programs.

Cryopreservation of low/no-demand lines is an effective, secure method to free up vivarium space to support production breeding of the higher priority models.

The generation of unique genetically modified models requires an investment of thousands of dollars and several months to complete. The subsequent characterization of the model is an even greater investment, often taking years' effort in the laboratory.

It is incredibly risky to "keep all your mice in one basket", but it is all-too-often the case that investigators maintain a single breeding colony of models with no insurance or backup in the event of a catastrophic loss.

The disastrous impact of maintaining sole-source product colonies of genetically modified lines in a single location was never more apparent than in the Fall of 2012, when Superstorm Sandy hit New York City. The storm surge flooded the East River into the underground vivarium space of the New York University Medical School, leading to the loss of hundreds of unique genetically modified mouse and rat lines. Whole research programs were lost and careers delayed or damaged due to the losses in the animal research program.

Nor is this story unique: A similar disaster occurred at Baylor College of Medicine in Houston, TX, following tropical storm Allison in 2001; and again, at the University of Texas at Austin following Hurricane Katrina in 2005. In each of these cases, investigators that proactively cryopreserved their lines were much better positioned to continue their work than those that did not.

Natural disasters aside, vivaria are also susceptible to the outbreak of fire, floods due to bursting pipes, loss of delicate environmental controls, and outbreak of disease. In all such cases, cryopreservation allows investigators to easily reestablish a breeding colony of their models if the live production colony is lost.

Rodent models are powerful tools for studying human disease, in large part because they have well-defined genetic backgrounds. Thus, maintaining the genetic integrity of a model is a fundamental element to employing models in your research.

Unfortunately, continuous breeding, even inbreeding, of rodent lines complicates the maintenance of genetic integrity across generations. Spontaneous genetic changes are inevitable, but continuous breeding can lead to genetic drift and subtle changes in phenotype over time.

Possible consequences of genetic drift include:

Cryopreservation of rodent lines at regular generational intervals ensures that, if genetic integrity is lost, it can be easily and quickly re-established.

For those genetic changes that are intentional, such as an intercross or backcross, cryopreservation can be used effectively to maintain the original lines, or even preserve the line at regular intervals if it is necessary to "reverse engineer" the process.

Transporting of live animals, whether short or long distance, is stressful and expensive. In addition, one risks that the stress from transport impacting the health, welfare, and occasionally desired phenotype upon arrival. Furthermore, most animal facilities have strict pathogen exclusion policies, requiring rodent lines be rederived prior to entry. All of the above make distribution of models across the globe in the form of live animals challenging.

Hence, maintaining lines in cryopreserved form is an effective and efficient method of preparing the models for distribution to other laboratories.

Compliance with the 3 "Rs" of Animal Welfare

There are several animal welfare benefits to cryopreservation, which supports efforts to "reduce, refine, and reuse" animal models in research.

Cryopreservation removes the need to maintain a continuous breeding colony in order to secure access to a given model in the future, greatly reducing the number of living animals required.

Cryopreservation is a cost-effective method to protect valuable animal models from catastrophic loss and preserve genetic material to refresh rodent lines as needed. It also frees up space and resources for more actively-used strains.

Cryopreservation efforts typically cost a few thousand dollars per strain and require the re-derivation of the line when required. However, the high cost of maintaining live colonies, risk of microbial or genetic contamination, and threat of catastrophic loss make cryopreservation a comparably cost-effective method of long-term colony management.

3. Wilmut I. The effect of cooling rate, warming rate, cryoprotective agent and stage of development on survival of mouse embryos during freezing and thawing. Life Sci II. 1972. 11(22):1071-1079.