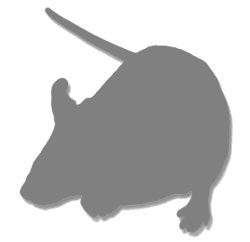 The OT-II microinjected model was developed by Dr. Francis Carbone of Monash Medical School and Dr. William R. Heath of the Walter and Eliza Hall Institute. The model was created by microinjecting the rearranged Valpha2 and Vbeta5 T cell receptor into B6 x B6.C-H2bm1 blastocysts. Taconic received stock from Keio University in June 2001, and the mice were rederived by backcrossing to C57BL/6NTac. OT-II transgenic mice were crossed with a homozygous C57BL/6NTac Rag2 targeted mutation model (RAGN12-M), and then intercrossed for homozygosity at the Rag2 allele. The model was rederived by embryo transfer and is maintained by mating of mice that are homozygous for Rag2 disruption and heterozygous for the OT-II transgene to mice that are homozygous for the Rag2 disruption and wild type for OT-II.

Due to poor production and high incidences of rectal prolapse in the commercial colony, Taconic has backcrossed the parent line 1896 with line RAGN12 (4 generations), and have replaced line 1896 with a new line designation 11490. In doing so, we brought the TCR transgene onto a more pure C57BL/6NTac background. In combination with the backcross strategy, we updated the line mating format to: ko/ko;tg/tg (male or female) by ko/ko;wt/wt. All line animals are hemizygous for the OT-II T cell receptor transgene. An extensive review of flow cytometry expression and frequency of CD4 T cells for hemizygous and homozygous OT-II mice showed that T cell numbers and TCR expression levels were similar. We expect minimal to no functional difference between the genotypes in typical experiments.