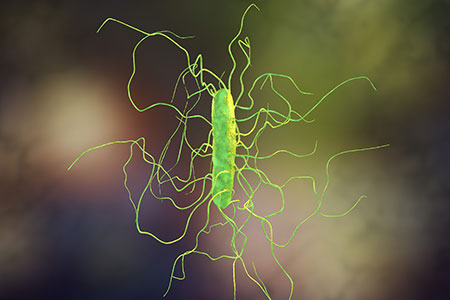 As people increasingly rely on smartphones and tablets, it should come as no surprise that this trend also exists in laboratories. While this is unlikely to pose a problem in your kitchen when using your phone as a cooking timer, there are potential issues associated with use of smartphones and tablets in laboratory animal facilities. Such devices can be contaminated with bacteria, including pathogenic species which some animal facilities may wish to exclude.

Because banning phones and tablets from a research animal facility may be impossible, it is critical to identify methods for limiting transmission of bacteria from devices to animal colonies. Lieberman et al. investigated several sanitation methods for their ability to reduce aerobic bacteria on smartphones.

The researchers evaluated the following methods:

Of the sanitation methods tested, researchers identified the UV devices as more effective than other methods, with differences in efficacy between the tested devices. All methods demonstrated reduction in bacterial colony counts after use, but most methods failed to completely disinfect the phones and reduce bacterial colony count to zero1.

“Smartphones can serve as fomites and potentially transmit pathogens, including bacterial species such as methicillin-resistant Staphylococcus aureus.”
– Lieberman et al.1
Multi-user research facilities are a challenging environment from an animal health perspective. Ideally, items which might serve as a source of contamination would be restricted from entry into animal facilities. Realistically, facility directors may not be able to prohibit smartphones from animal rooms, and so adoption of an effective and easy to use method of sanitation is critical. Such methods must not be onerous, or user compliance may be limited.

Laboratory animal producers can and do set more stringent requirements for their facilities. At Taconic Biosciences, personal smartphones are prohibited from animal rooms, while company-owned tablet computers are used in some rooms.