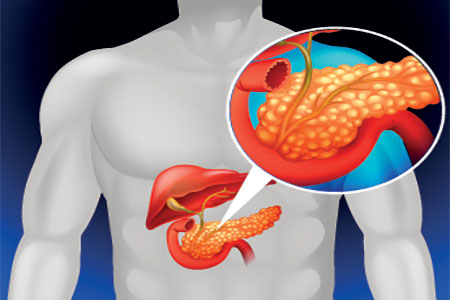 Alterations in the microbiome have an acknowledged role in cancer pathology1,2. Earlier this year, however, researchers at New York University published a manuscript3 connecting the pancreatic microbiome to cancer progression.

In this report, Pushalkar et al. demonstrate that the endogenous microbiome of the pancreas can drive immunosuppressive conditions in humans and mice, which creates a pro-tumorigenic state. Treatment regimens that include modulating the microbiome show promise for treating pancreatic cancer.

Previous research showed that anti-tumor responses were inhibited by microbial signaling through innate immune receptors. To determine if gut bacteria access the pancreas, germ-free mice were administered fluorescently-labeled bacteria by oral gavage. Their results showed a migration of these labeled bacteria into the pancreas, suggesting that the gut microbiome may affect that specific microenvironment.

Additionally, detection of increased bacterial 16S rRNA signatures in both humans and mice with pancreatic ductal adenocarcinoma (PDA) supported a possible role for the microbiome in pancreatic cancer progression.

To demonstrate a role for bacteria in promoting pancreatic cancer progression, researchers used the KC model of pancreatic oncogenesis. The authors derived the KC model as germ-free and observed that these germ-free KC mice were protected against disease progression. Similarly, microbial ablation of wild type mice injected with tumor cells led to a 50% reduction in tumor burden.

To further demonstrate the role of microbiota in advancing disease, germ-free KC mice received fecal transplants from PDA-bearing KPC mice or wild-type animals. Germ-free KC mice that received the PDA fecal transplants, but not wild type, showed accelerated disease progression and a lack of T-cell infiltration. These experiments clearly show a role for microbiota in promoting tumorigenic conditions in the KC model.

Following microbial ablation with antibiotics, there was a marked increase in the number of intratumoral T cells and a reduction in the number of myeloid-derived suppressor cells (MDSC) in the orthotopic KPC model. In addition, the researchers observed the following findings:

The authors performed several depletion and adoptive transfer studies that demonstrated the requirement for adaptive immunity in providing protective responses in this cancer model. With this link established, they hypothesized that microbial ablation and treatment with a checkpoint inhibitor (anti-PD-1) would act synergistically to reduce tumor progression.

Following a tumor challenge, anti-PD-1 treatment was not sufficient to reduce tumor progression on its own. However, microbial ablation + anti-PD-1 treatment combined to reduced tumor growth at a level greater than microbial ablation alone. In supplementary data, the authors show that the combination therapy also enhanced intratumoral T cell activation.

Pushalkar et al. show that the pancreas contains its own microbiome, which is sourced from the gut environment. These pancreas-associated microbiota demonstrate immunosuppressive qualities in a PDA model and drive disease progression.

Microbial ablation using antibiotics resulted in reduced tumor growth and allowed for more effective immunotherapy by increasing PD-1 expression. This is another example of successfully manipulating the microbiome to limit disease progression and enhance treatments.