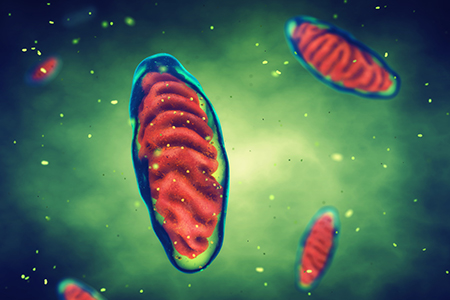 One organelle which differs distinctly from others is the mitochondrion. In addition to generating the cell's energy in the form of adenosine triphosphate (ATP), mitochondria have their own DNA and replicate by binary fission. Mitochondrial DNA is inherited almost completely from the mother during zygote development and encodes for proteins vital to the organelle's own function and reproduction. In addition to their unique history and structure, mitochondria are also thought to play key roles in disease development and progression.

Mitochondria are commonly referred to as the "powerhouses of the cell" because of their essential role in energy production. They are responsible for oxidizing acetyl-CoA into ATP and carbon dioxide, thereby releasing stored energy derived from fats, carbohydrates, and proteins. This process is known as the citric acid cycle, TCA cycle, or Krebs cycle1.

Depending on the function of the cell, the number of mitochondria in the cytosol can range from zero in red blood cells to thousands in liver and muscle cells2.

Mitochondria are composed of a double membrane as well as specialized compartments that carry out different energy-production related functions. Inside the inner mitochondrial membrane is the matrix, which contains ribosomes, enzymes, proteins, tRNA, and multiple copies of the mitochondrial DNA (mtDNA) genome. The mitochondrial genome contains thirty-seven genes that encode for thirteen polypeptides, twenty-two tRNAs, and two rRNAs3.

How is Mitochondrial DNA (mtDNA) Different from Nuclear DNA?

While both mtDNA and nuclear DNA are double-stranded, there exist many differences in the amount and composition of the two nucleic acids:

Unlike nuclear DNA, mtDNA is not inherited in the same manner. Once an egg cell has been fertilized, both the nuclei from the egg and sperm contribute equally to the genome of the forming zygote. However, the mitochondria, and therefore the mtDNA, are usually inherited solely from the egg. This is caused by the ubiquitination of the sperm's mitochondria, which targets these organelles for destruction by cellular machinery1. There are some instances in which parental mitochondria remain in the zygote undegraded, but in most instances mitochondria are maternally-inherited7.

Due to their unique characteristics it is hypothesized that mitochondria were once primitive bacterial cells that came to live inside larger cells. The endosymbiotic theory describes how two organisms benefit from living together; in this case, both benefit from the mitochondria living inside the larger plant or eukaryotic cell.

Some key features of mitochondria that provide clues to their origin are the presence of a double membrane, the presence of a genome that encodes proteins essential for their function, and reproduction by binary fission4. Binary fission is the division of a single cell into two new cells, each of which contain the same contents and abilities as the original cell5.

Mitochondrial dysfunctions have been associated with the following diseases8: