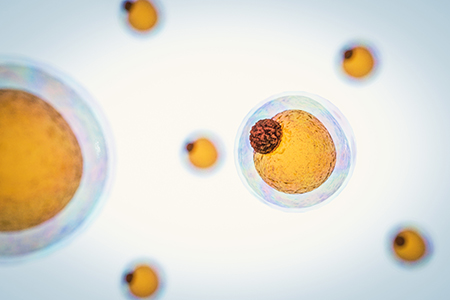 The incidence of metabolic disease and the number of obese patients in the US is growing at an alarming rate. While the Western diet and lack of exercise may be to blame for some, there are complex biological processes that underlie the progression of obesity in all cases.

The Three Kinds of Adipose Tissue

Fat, also referred to as adipose tissue, is responsible for the increased storage of fat in the form of triglycerides in various areas of the body. There are three different kinds of adipose (fat) tissue: white fat, brown fat, and beige fat. While these cells are optimized for storing energy in the form of triglycerides, they also store proteins, vitamins, toxins, and regulatory hormones. Additionally, fat cells can secrete hormones and key signaling molecules to regulate metabolism, giving them an endocrine function that was not always apparent1.

There are three main kinds of fat cells (adipocytes) in the body:

Several hormones are stored and secreted by adipose tissue, with effects on the body's overall hormonal balance:

It was not made clear until 1994 that adipose tissue could be involved in hormone imbalance and obesity until Jeffery M. Friedman from Rockefeller University found that a strain of massively-obese mutant mice was missing a hormone known as leptin3.

In healthy animals leptin helps control hunger by communicating with the hypothalamus, essentially telling the brain to stop eating once enough food has been consumed. However, in the mutant mice lacking this hormone, they were not able to control the amount they ate and in turn became twice as large as control animals4.

In obese patients, the leptin hormone is present; however, the brain has developed a decreased sensitivity to its action. This also leads to increased eating and subsequent weight gain.

Weight loss is usually the loss of mass in adipose tissue and not the number of adipocytes in the given area. This decrease in mass results in the secretion of triglycerides as well as stored hormones, vitamins, and toxins.

Adipocytes that have lost significant mass have altered metabolic and inflammatory characteristics, as well. For example, a decrease in adiposity leads to lower levels of both leptin and insulin, as well as a transient decrease in thyroid hormones during the early stages of weight loss8.

While a decrease in the size of adipocytes is beneficial to the body, more studies are needed to conclude whether the released hormones and signaling molecules have a positive or negative effect on the maintenance and regain of weight.

Most Popular In Cardiovascular Disease