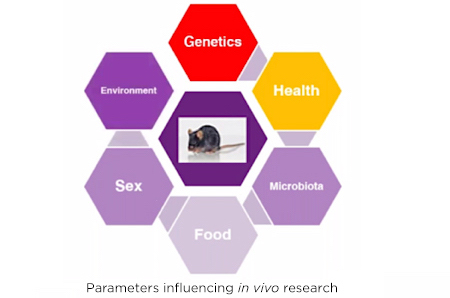 What is genetic quality and how does it impact in vivo research? Dr. Ana Perez addressed this topic in a recent webinar, making the case that research reproducibility requires high genetic quality of laboratory rodents.

How to Preserve Genetic Quality

Genetic background can influence phenotype of transgenic models. Dr. Perez showed examples of this effect from the literature.

In one example, atherosclerotic lesion size in animals with a particular set of mutations varies quite significantly across a large set of genetic backgrounds tested. Mice of different common strains carrying a Pdcd1 (PD-1) knockout displayed a range of effects, from lupus-like glomerulonephritis and arthritis on the C57BL/6 background to autoimmune dilated cardiomyopathy and gastritis on BALB/c.

Taconic has developed several different SNP panels for use in genetic monitoring. In the genome scan SNP panel, more than 1400 SNPs differ between some strains, offering good reliability for strain discrimination. SNP panels can be used to direct accelerated backcrossing (speed congenics).

Just denoting the basic strain name is not enough to understand and maintain a line properly. The C57BL/6 strain has multiple known substrains and they can vary quite a bit in phenotype. For example, the C57BL/6J substrain is known to carry a mutation in the Nnt gene which is associated with impaired glucose homeostasis and reduced insulin secretion. C57BL/6N substrains carry a mutation in the Crb1 gene (Crb1rd8 allele) which causes a mild form of retinal degeneration. Several other genetic variants have been documented in C57BL/6 substrains.

Dr. Perez stressed the importance of careful recordkeeping and cryopreservation. Use of transgenic models on defined genetic backgrounds is important. Use of mutants with mixed backgrounds can cause genetic drift over time, loss of phenotype and results which are not reproducible.

A particular consideration with conditional mutations is incomplete excision. While cre-mediated deletion may be very efficient, it is not perfect, so testing for presence of all possible alleles (conditional versus deleted, for example) is very important. Undetected residual conditional alleles can confound experiments. Careful selection of genotyping controls can help avoid this problem.