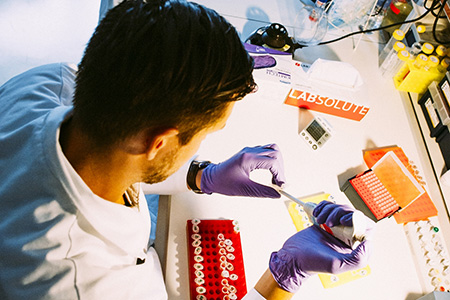 Why do 90% of compounds fail the FDA approval process after entering Phase I clinical trials?1

Many failed projects can be traced to unreliable preclinical assessments of toxicity and efficacy of the potential new drugs2 – often due to a lack of predictive and reliable in vivo testing.

Wild-type mice and rats were the gold standard in the assessment of efficacy and toxicity for many years, due to their relative ease of use and affordability. Their predictive value in in vivo experiments is limited, however, due to differences in how rodents and humans can react to the same compound. Novel drugs may perform well in animal models, only to have toxic effects when metabolized by human beings – or no effect at all.

Increasing the predictive value of preclinical assessments would streamline drug development, while reducing toxicity and increasing efficacy. But how?

Genetically engineered rodent models may be the solution.

New technologies for modifying the rodent genome, including CRISPR/Cas9, combined with the optimization of standard gene targeting technologies, enables fast and efficient development of models tailored to specific research goals. These genetically modified, biologically-relevant models can help researchers overcome some of the challenges in the drug development process.

A prototypical example of improving the in vivo toxicity screening process with genetically engineered mouse models is the rasH2 transgenic mouse, developed by Dr. Tatsuji Nomura of Japan's Central Institute for Experimental Animals (CIEA)3. The rasH2 carries the human homolog of the Harvey rat sarcoma virus oncogene, significantly increasing its susceptibility to genotoxic carcinogens in safety testing. Researchers from all sectors of the drug development industry - including academic research institutions and governmental agencies - have dramatically decreased both animal cohort size and project timelines with the use of this model4.

Along with safety, candidate drug potency and efficacy are key considerations in advancing a promising compound through the pharmaceutical development pipeline. Most failures in late clinical stages can be attributed to lack of efficacy; in many cases, the in vivo model employed at the preclinical development stage may not fully recapitulate the biological conditions necessary for this assessment. An endogenous mouse or rat target protein may not bind and respond to the lead molecule which has been designed for its human counterpart, resulting in erroneous or ambiguous outcomes.

"Humanized" rodent models, where an endogenous gene is replaced with its human orthologue, are often the solution.

For example, Taconic recently developed a humanized mouse model for Eli Lilly, where the endogenous dopamine receptor D1 gene was replaced with its human homologue5. Using this model, their scientific team successfully tested the in vivo pharmacodynamic properties of a new dopamine D1 receptor potentiator, DETQ, which interacts very specifically with the human protein, but is not active on the mouse or rat receptors. The result of this experiment has been very encouraging and the molecule has advanced to phase I testing.

One exciting methodology for the treatment of cancer and neurological disease is the use of therapeutic antibodies targeting specific antigens involved in the emergence and progression of the pathology. While this approach shows great promise, preclinical in vivo testing of these antibodies in rodent models has been difficult due to their high specificity towards the human target proteins6.

Biogen scientists addressed this challenge with a humanized mouse carrying a transgene expressing a mutant isoform of human β-amyloid (Aβ) precursor protein7. Using this biologically-relevant model, Biogen was able to prove efficacy of the antibody in a preclinical model of Alzheimer's Disease (AD). The antibody, later renamed aducanumab, is currently in the latest stage of a phase I clinical trial for AD. Biogen released a summary of the exploratory endpoints for efficacy, showing slowed disease progression, infusing new hope for the treatment of this devastating disease8.

Breakthroughs in the modification of mouse and rat genomes paved the way for the generation of extremely specific and customized animal models, supporting the evaluation of many different aspects of drug function and effects in vivo.

4. The rasH2 Mouse: A Model to Accelerate Carcinogenicity Testing in Mice.