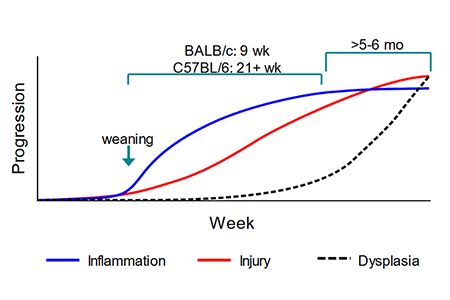 Dr. Philip Dubé recently presented a webinar on validated Il10 knockout mouse models for IBD research. He gave an overview of research in this area and presented new data on these models from studies done by Boehringer Ingelheim and Incyte.

Due to time constraints, many of the questions submitted during the webinar went unanswered. We present a full Q&A here.

Dr. Philip Dubé: The genetic basis for strain-specific differences in the Il10 knockout model has been widely studied in C3H background (a permissive strain) vs. B6 background (a resistant strain). This hasn't specifically been studied in BALB/c mice, but this strain is also considered a permissive strain. There are at least 6 loci that are colitogenic in C3H vs. B6, with a major locus on chromosome 3. There are likely multiple genetic determinants of colitis severity that differentiate B6 vs. BALB/c. PD: Splenomegaly and enlargement of the mesenteric lymph nodes are to be expected. While we have not examined other organs in our Il10 knockout models, others have reported that the brain, heart, lungs, liver, pancreas and kidneys all appear normal in Il10 knockout mice despite extensive colon involvement. PD: IL-6 is a key effector cytokine of the Th1 response in the colon, which is characteristic of the mixed Th1/Th17 inflammation in Il10 knockouts. Circulating IL-6 is likely coming from that site of localized production. PD: The phenotype in Il10 knockout mice is chronic, progressive and unremitting. Altering the microbiota can influence progression, but is unlikely to resolve the phenotype. Reducing the microbial load with broad spectrum antibiotics can slow or prevent disease progression/onset. PD: The original Il10 knockout (KO) models were generated on a 129P2 background and subsequently backcrossed to a number of different strain backgrounds, including C57BL/6, BALB/c, and C3H. The biology of the new Taconic models is fairly similar if not identical to the original models. There could be some nuances which differ between them. When backcrossing a model onto a new strain background, there are always passenger loci which are derived from the original ES cell background, in this case 129. There are many other immune-related genes in close proximity to the Il10 locus, so passenger loci in that region could have an influence on phenotype. You must also consider which substrains were used; the literature does not provide much detail on which substrains the original knockouts were backcrossed to, and we know there can be significant differences between substrains of C57BL/6. The new Taconic models were generated on a pure strain background by CRISPR. From a practical standpoint, there are licensing differences between the models, and the ease of access to the Taconic models is a point of differentiation compared to the original Il10 knockouts.

PD: The studies presented in this webinar were run in very clean pharmaceutical vivariums. What does "clean" mean? Reach out to us — we can send you a pilot cohort so you can evaluate how the model will perform under your facility conditions. There are various alternatives to Helicobacter which were discussed in the presentation. We can help you determine which of those might best suit your situation. Outsourcing of studies is another option. There are contract facilities which can work with Helicobacter, and we can put you in touch with contract research organizations. PD: Various probiotics have been used to ameliorate disease in the Il10 knockout model. But it is often the lack of bacteria that protects against the disease rather than the presence of particular bacteria which is beneficial. Our Excluded Flora Il10 knockout colonies are produced in individually ventilated caging (IVC) barriers and have fairly minimal microflora. We see almost no incidence of disease in B6 Il10 knockouts and very minimal in BALB/c Il10 knockouts up to 18 weeks of age under these conditions.

Learn more about the Taconic Biosciences' Portfolio supporting this field of research:
PD: Yes. We have performed these types of projects with other strains of germ-free mice. We can use customer-provided microbiota and perform associations and maintenance of associated colonies. For Il10 knockout mice, disease onset is a concern and mice would need to be shipped to the customer facility prior to significant disease development.

PD: There are many methods to quantify the extent of inflammation in this model. One widely used method is described in detail. The current study scored slides based on A) inflammation [macrophage, lympocyte and PMN] [score 0-5], B) gland loss [score 0-5], C) erosion [score 0-5], and D) mucosal hyperplasia [score 0-5]. PD: The protocol is described in this article. Briefly, fresh/frozen fecal pellets are resuspended by vigorous vortexing in PBS + 0.1% Tween 20, then clarified by centrifugation (10 min at 12,000 rpm). Supernatants are analyzed by ELISA. PD: The field largely sticks to lipocalin-2 as a surrogate marker, as opposed to calprotectin, as it is a sensitive and broadly dynamic marker. The reason for this is largely precedent and the lower cost for measuring lipocalin. There is no technical or scientific reason to not measure calprotectin. Calprotectin has been used in the DSS model, but would need to be validated in the Il10 knockout model. PD: Absolutely. Colonoscopy is a robust way to detect inflammation, but is time-consuming. There is a learning curve. The features of the disease as represented in the distal colon are quite apparent by colonoscopy. The probe used with mice is small, so you can only visualize a few centimeters. You cannot observe disease pathology further up the GI tract by colonoscopy.

PD: I'm not aware of data using piroxicam in a purified diet. Piroxicam is very hydrophobic, so it's difficult to get it into suspension or distributed evenly through feed. Manufacturers of purified diets may have guidance on best practices for piroxicam incorporation into feed. Piroxicam needs to be carefully titrated to induce disease without inducing mortality. PD: Il10 knockout mice are extremely sensitive to systemic LPS administration, leading to TNF overproduction and shock/death, so this might not be feasible. It's possible this might work if LPS were given luminally or with a different microbial trigger. The problem with luminal LPS administration is whether it would activate the epithelial (largely basolateral) or mucosal TLR4 in the colon. PD: Maybe. Note that it's not just regulatory T cells which secrete IL10. Macrophages, dendritic cells, epithelial cells and others have all been shown to produce IL10. You could harvest naïve T cells from an Il10 knockout mouse and transfer to a Rag2 knockout. This might reduce interference of regulatory T cells in your phenotype, but might not work. An IL10 receptor knockout might be a better choice. You could also consider a Rag2 knockout which also carries the Il10 knockout. This has been reported in the literature and was done to help define the role of T cells in disease. But I do not believe this model has been combined with the T cell transfer model.

PD: Not directly. Preclinical testing using human-specific biologics is a challenge faced in many therapeutic areas. It is possible to generate a mouse with a human knock-in allele for that specific target; that line could then be crossbred to the Il10 knockout. It depends on the target as to whether that approach would be appropriate. Generation of human target knock-ins is an approach that's been used widely in immuno-oncology and may apply to other fields such as IBD.