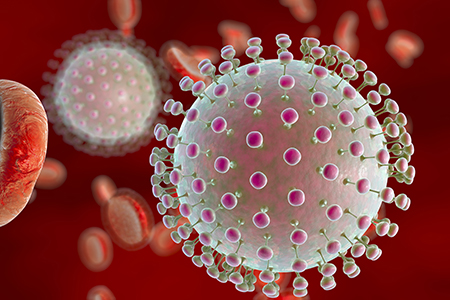 Animal models play a critical role in studying a variety of infectious diseases, from lyme to influenza and salmonella, and selecting an appropriate model system for each is key. Both immunocompetent and immunodeficient mice have a role to play in infectious disease studies.

Inbred, immunocompetent mice are often chosen for infectious disease studies, and different inbred strains can show varying susceptibility to a particular virus, parasite, or bacterium. Investigations of these differences have led to an understanding of the genetic determinants of host response to infection.

Inbred mice have a number of experimental advantages:

At a high level, individuals in an inbred strain are identical to each other and homozygous at all loci. But spontaneous mutations occur during genome replication and individual animals will vary slightly due to the introduction of spontaneous mutations during routine breeding. We minimize the fixing of such mutations into a strain via genetic refreshment at a set frequency.

Super immunodeficient mice may be engrafted with a humanized immune system, permitting study of human-specific diseases such as HIV. HIV only infects human T cells, so modeling it in a normal wild type mouse is not possible. By engrafting human T cells into a super immunodeficient mouse such as the NOG, the humanized immune system mouse can now serve as a small animal HIV model.

The table below details the susceptibility of common inbred strains to several bacterial and viral agents, which may be useful in designing infectious disease studies.

Susceptibility of Common Strains to Infection