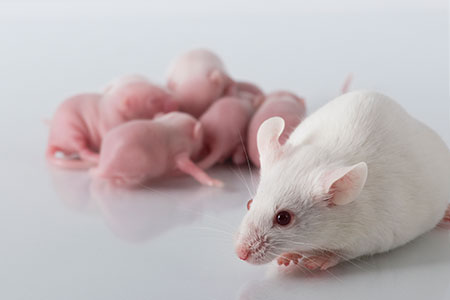 Timed pregnant mice and rats are important research tools, with applications in developmental research, genetic engineering, and generating tissue cultures. They are the most efficient way to obtain a cohort of embryos, fetuses, or pups with a precisely defined, matched age. But what exactly are timed pregnant mice?

What Are Timed Pregnant Mice and Rats?

A timed pregnant female is a mouse or rat with a precisely known mating date. This permits either the harvest of embryos or fetuses at a desired gestational age, or production of litters born on a desired day.

These timed matings are accomplished by setting up matings on a specific day and checking for evidence of copulation the next day. Females which show evidence of copulation (sperm plugs in mice, positive vaginal smears in rats) are isolated. This pinpoints mating — and presumably conception — to a particular twenty-four-hour period.

At Taconic Biosciences, the day of sperm cell detection in females is called the "sperm-positive date" and is considered Day One of gestation (All timed pregnant models should be ordered by the sperm positive date).

Several methods are used to determine gestational age including development, weight, size, and appearance, however litter size influences these factors. An excellent reference is available online at UNSW for rats and mice.

Development of embryos and fetuses typically proceeds along a well-defined timeline, researchers occasionally observe that a harvest appears to consist of embryos or fetuses younger than the known gestational length would suggest.

Embryonic diapause may be the likely culprit in those instances when embryos or fetuses appear younger than expected. Embryonic diapause is a temporary halt in embryonic development which occurs prior to blastocyst implantation. This can be induced by environmental stressors or maternal input such as lactation1. As a result, the actual rate of embryo development can vary from the nominal gestational age.

The excellent reproductive performance of the Sprague Dawley® model makes it a preferred choice for generating timed pregnant female rats. Embryos from timed pregnant Sprague-Dawley® rats are used in the study of embryonic development, teratology, and reproductive toxicology, as well as in experiments using fetal tissue from specific embryonic ages.

The outbred Swiss Webster mouse also has superior reproductive performance and is an excellent choice for experiments in which an outbred mouse model is acceptable. If an inbred strain is required, the Black 6 mouse is commonly used. Timed pregnant Swiss Webster mice will typically provide greater embryo/fetus yields compared to the Black 6, which has smaller litter sizes.

Timed pregnant animals are used extensively in genetic engineering, developing tissue cultures, and developmental research. The ability to harvest embryos and fetuses at particular gestational stages is critical for these studies.