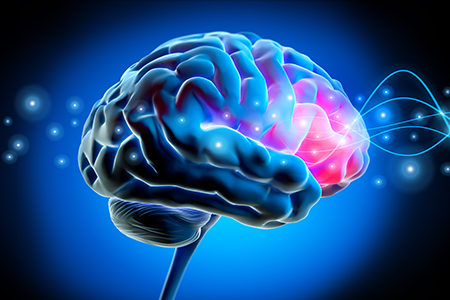 Psychiatric disorders, including depression, bipolar disorder, and schizophrenia, are multifactorial and polygenic. The underlying risks for these diseases are increasingly linked in epidemiologic studies to the complex interplay between genetic and environmental factors. These risk factors can act cumulatively throughout a patient's lifetime, with adverse life events being strong risk predictors1. This likely occurs by combined effects of adversity with genetic predispositions that together alter gene regulation in a way that has critical effects on cell function and eventually organ systems, including the brain and behavior. Gene-environment interactions (GxE) not only have main effects on disease development but also may interact to shape risk and resilience1,2. A central question that may help us better understand the pathogenesis of psychiatric conditions is: how do genes and environment interact at the molecular level to ultimately shape risk and resilience?

Several GxE studies have identified the stress hormone system to play a unique role in the development of psychiatric disorders. This system is activated when an individual is exposed to a threat, leading to the release of glucocorticoids (GCs) from the adrenal gland. GCs are released in the systemic blood flow and reach every organ of the body, including the brain3,4. GCs can trigger a transcriptional response to stress that involves the upregulation or downregulation of a large number of genes that are associated with the stress response not only at the cellular level but also at brain circuitry and systemic levels3,4.

Early life adversity and genetic predispositions lead to psychopathology: FKBP5 as a model

GxE interaction studies have increasingly implicated several genetic loci in the stress response and have identified the gene FKBP5 encoding FK506 binding protein 51 (FKBP51) as a key determinant. FKBP51 is a heat shock protein 90-associated co-chaperone of the steroid receptor complex that is an endogenous regulator of the stress-neuroendocrine system. It is strongly stress-responsive, and its gene is associated with early adverse interactions, conferring risk for many psychiatric disorders (See Figure 1)1,2. 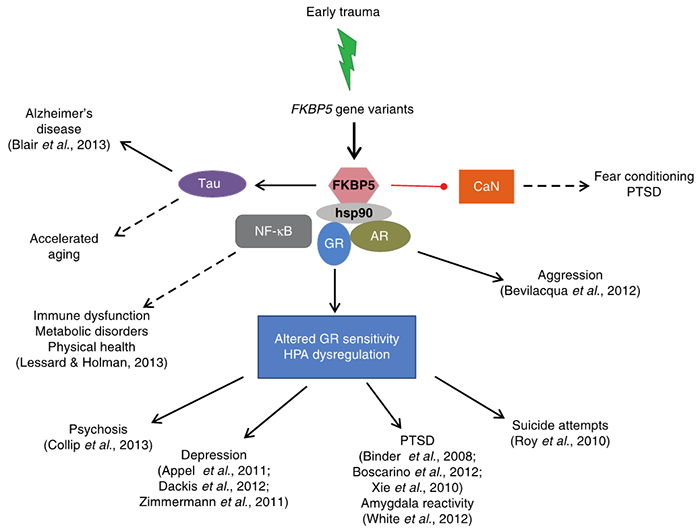 Figure 1: Simplified model of the pleiotropy of GxEs at the FKBP5 locus via the intracellular crosstalk of FKBP51 protein with other molecules. Solid arrows denote phenotypes (or endophenotypes) that have evidence for GxE, whereas dotted lines are used for phenotypes without current evidence and which could be explored in future research studies. References for existing evidence are provided in parentheses. AR, adrenal receptor; CaN, calcineurin; GR, glucocorticoid receptor; HPA, hypothalamic-pituitary-adrenal axis; Hsp90, heat shock protein 90; NF-KB, nuclear factor kappa-light-chain-enhancer of activated B cells; PTSD, post-traumatic stress disorder1.

The genomics of FKBP5 in human disease

In the human population, there is a wide variation in the perception of stressful challenges and variation in the physiological expression of stress. In the context of childhood trauma, the differential expression of the FKBP5 gene has been found in psychiatric patients compared to controls2,5. The variation in expression levels of FKBP5 were increasingly reported in multicentric clinical studies to profoundly influence stress coping, impact stress responsivity, and risk or resilience to psychiatric disorders in human carriers of the single nucleotide polymorphism (SNP) rs1360780 within the FKBP5 gene locus5-8. The ability of the A/T or C/G rs1360780 allele to impart differential stress responses could contribute to the wide variation in stress responses observed in the human population2.

A comprehensive review of studies that examined the FKBP5 messenger RNA and protein levels supports a positive association with psychopathology risk. In the majority of postmortem studies, elevated FKBP5 mRNA expression was found in multiple cortical regions in different psychiatric disorders, including Major Depressive Disorder (MDD), Bipolar Disorder (BPD), Post-Traumatic Stress Disorder, Schizophrenia, and Autism Spectrum Disorder. Within the limbic system, FKBP5 expression was also increased in the hippocampus of patients diagnosed with MDD, BDP and schizophrenia but was reduced in the amygdala of suicide victims. These studies support the heightened risk for psychopathology with increased FKBP5 expression2.

Novel Humanized Mouse Models to Study the Neurobiology of Stress

Researchers are often limited by the lack of research tools and models in the investigations of neuropsychiatric disorders and may inefficiently expend time and resources to generate novel animal models. Unfortunately, the SNPs of human FKBP5 do not exist in laboratory rodents and it is technically difficult to humanize the entire large human FKBP5 (>16,000 bp) gene. Hence, Boehringer Ingelheim and Taconic Biosciences generated two novel humanized mouse lines, based on work by the group of Elisabeth Binder at the Max-Planck Institute of Psychiatry, by targeted replacement of the murine Fkbp5 exons 2 to 11 with the human FKBP5 counterpart containing either the risk-associated A/T or the resiliency-associated C/G polymorphism. Hereafter, these lines are referred to as risk (A/T) and resilience (C/G), respectively9. These models enabled Nold and co-workers to study the effects of these human gene variants. These researchers:

In greater detail, the researchers demonstrated that neural cells derived from the mouse models carrying the different human rs1360780 polymorphisms display differential responsiveness to GCs. Astrocytes derived from the risk (A/T) strain are more responsive than those from the resiliency (C/G) strain. Since it was previously unknown if Fkbp5 expression levels in the brain might affect cellular stress responsiveness and how genetic risk factors for stress vulnerability might affect astrocyte functions, these new findings imply astrocytes may be a functional mediator of FKBP5 polymorphism-associated variations in stress responses within the CNS9.

SNPs in human FKBP5 have been shown to impart variability in hypothalamic-pituitary-adrenal-axis responses in the healthy population, but more importantly to impart differential risk for pathology when combined with environmental risk factors such as early life adversity. Early life adversity has been discussed to prime the stress response systems to pathological processes3,4 and astrocytes were reported to be involved in the early programming of stress responsivity5-8. Since the brain is the centralized hub for the integration of information from dynamic internal and external conditions, it is pivotal in the initiation and termination of the stress response. Regulators of GC signaling, such as FKBP51 protein, will necessarily contribute to cell type-specific responsiveness. Therefore, these novel FKBP5-humanized mice comprise a unique set of complementary models that would advance mechanistic studies into how FKBP5 SNP variants can alter the trajectory of pathology due to environmental stressors.

Since genetic, epigenetic, and post-mortem data from multicentric studies in humans suggest that perturbed FKBP5 expression is associated with risk for psychiatric disorders5-8 and that manipulating Fkbp5 levels in rodents leads to the concomitant behavioral changes, the FKBP51 protein presents an interesting therapeutic target, at least for a subset of patients. Initial results of small molecule FKBP51 antagonists in rodent studies appear promising in reducing anxiety and increasing stress coping as well as increasing GR sensitivity and enhancing negative feedback of hypothalamic-pituitary-adrenal axis regulation10,11. However, FKBP51 antagonism in humans presents several issues, including its tissue-specific expression pattern and its role as a molecular hub of many important cellular pathways12.

These two novel genetically humanized models — that carry either the risk (A/T) allele or the resilient (C/G) allele of rs1360780 — represent important new tools for the study of psychiatric disorders. The work done by researchers from Boehringer Ingelheim and Ulm University (Germany) to characterize the murine phenotypes is an important first step in the application of these new models9. These findings support the need for further study to draw conclusions as to whether the risk (A/T) allele would have functional influence on global GC sensitivity to influence neurophysiology, how these mouse models could be used to model the GxE interactions in psychiatric disorders, and the potential impact of glial FKBP51 signaling on central stress responses.

These mice are now available to both non-profit and for-profit researchers worldwide as part of Taconic's toolkit of preclinical models to support the drug discovery process to benefit patients with psychiatric disorders.