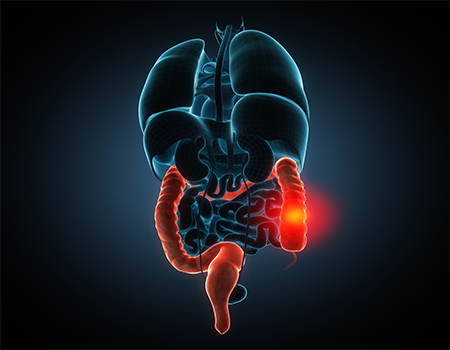 Cytokines have been implicated in the pathogenesis of inflammatory bowel diseases such as Crohn's disease and ulcerative colitis, and modulation of cytokines is one therapeutic strategy. Ustekinumab, an antibody that targets IL-12p40 and a component of the cytokines IL-12 and IL-23, demonstrated clinical efficacy against Crohn's disease, and Janssen has asked the FDA for approval of the drug for treatment of Crohn's.

Anti-Il12p40 antibodies also demonstrate efficacy in mouse models of IBD. The adoptive transfer colitis model involves transfer of Cd4+ T cells from a donor mouse to a syngeneic recipient mouse, which lacks T and B cells. The recipient is commonly a Rag2 knockout or scid mouse on the same strain background as the donor mouse. The adoptive transfer model of colitis has been reported to work on both the C57BL/6 and BALB/c strain backgrounds.

While there is some systemic connection between IBD and gut microbiota, the exact mechanism requires further research. Gut microbiota dysbiosis, for example, has been observed in patients with inflammatory bowel disease (IBD), including reduced bacterial diversity and altered gut microbiome composition1, but the relationship doesn't appear to be causal. Rather, dysbiosis appears to contribute to a feedback loop which fosters the disease once inflammation begins.


Much more research is needed into the role of the gut microbiome in IBD. While the study demonstrates a connection between cytokine modulation, microbiota taxa shifts and the presence or severity of IBD pathology, the mechanics of this connection remain unclear.

What is clear is that a better understanding of this interplay will open new opportunities for advancement in IBD therapies. The Crohn's & Colitis Foundation of America has established a Microbiome Initiative to study the interaction of the microbiome with Crohn's disease and ulcerative colitis. The Initiative's ultimate goal is "the translation of new insights and discoveries into specific strategies for microbiome-targeted interventions that more effectively treat, and may even prevent, IBD."