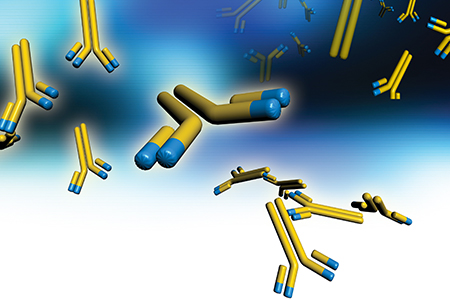 Spontaneous lupus erythematosus (SLE) is a chronic autoimmune disease with an unclear cause. Nearly all lupus patients have high levels of anti-nuclear antibodies with a relatively high proportion being pathogenic anti-Ro protein antibodies. At the end of March, researchers at Yale University published a paper entitled "Commensal orthologs of the human autoantigen Ro60 as triggers of autoimmunity in lupus" in the journal Science Translational Medicine in which the authors demonstrated that Ro60 orthologs exist in commensal bacteria commonly found in or on the human body.

To establish that anti-Ro responses can be generated in vivo following colonization with a commensal organism, the researchers utilized a germ-free mouse model. Germ-free C57BL/6 mice were associated with a single commensal organism for three to five months. During this colonization period, 100% of the commensal-associated mice developed anti-hRo60 antibodies as detected by enzyme linked immunosorbent assay (ELISA). To further demonstrate the role of commensal derived Ro60 in lupus, the authors used an inducible model for lupus. Briefly, when germ-free mice were monocolonized with a commensal organism and treated with a toll-like 7 receptor (TLR7) agonist they developed anti-hRo60 responses and detected lupus nephritis-like immune complex deposition in 88% of all glomeruli of the treated mice compared to less than 10% deposition in control animals treated with a TLR7 agonist alone.

For more information on the Taconic Biosciences' models and services mentioned see: