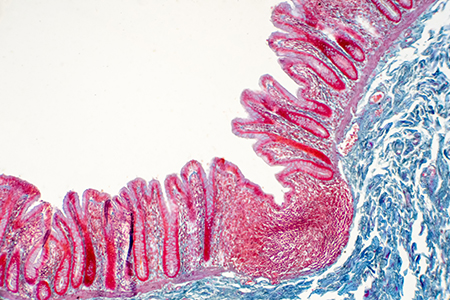 Over 100 scientists joined Taconic Biosciences for the virtual workshop on "IBD Mouse Modeling - Best Practices for Drug Discovery and Emerging Models". The more than 3-hour event covered a variety of topics, including variability and reproducibility of the models and their use for target discovery and therapeutic efficacy.

Prior to the event, many attendees submitted questions surrounding some of the challenges they have encountered with their IBD research. One of the more productive discussions around these challenges included the speakers addressing the meaning of developing a humanized IBD mouse model and differentiation and determining the best models for Ulcerative Colitis (UC) vs. Crohn's Disease (CD). Jeremy Goettel of Vanderbilt University did a thorough job of addressing this in his presentation and also during the interactive panel. Developing a humanized mouse with IBD requires full genetic control and manipulation of these models. His lab has been able to "culture hematopoietic stem cells (HSCs) indefinitely so that we can target certain genes much like we do for mice and then generate immune humanized mice that have certain genetic defects."

IBD is a polygenetic disease. Many models are monogenetic and rely on the deficiency or alteration in one gene (for example, the FoxP3 and IL10 genes). Identifying genetic polymorphisms of donors and possible genetic manipulation of HSCs may overcome some of the limitations of the humanized models. Philip Smith of Roche also touched on this by highlighting the lack of cross-reactive human targets in the mouse for the development of biologics. Some of the current humanized models fail to "generate the in vivo 'proof of concept'" for drug development and discovery, allowing researchers to put more confidence in the data and positive clinical outcomes. While the theory of humanized mice and the ability to translate mouse research to clinical patients presents great opportunity for IBD research, the models we have now still hold value because they allow us to investigate specific pathways and targets (for example, IL23) for therapeutics.

In order to answer the question about determining the best models of UC and CD, Mark Sundrud weighed in with his thoughts: while there are similarities in immune system pathways between the two diseases, there are differences in how these pathways impact the diseases. These differences also extend into the clinical presentation and location of the inflammation of both diseases. Most CD models largely focus on the colon and are affected by the microbiome. However, there is evidence of ileitis (and a few colitis) models not being affected by dysbiosis but displaying the presence of distinct immune cell subsets seen in IBD.

Another major topic of this workshop was the importance of the microbiome in the context of IBD models. The microbiome is a critical factor in most colitis models and can affect disease progression and severity.

Philip Dubé introduced this to the group and discussed ways to normalize the microbiome and customize the microbiome for your research. His talk segued into Benoit Chassaing's and Odile Engel's presentation on the use of Fecal Microbiota Transplant (FMT) for establishing and investigating the microbiome's contributions in IBD models. In addition to Dr. Goettel's description of the development of an HLA transgenic mouse on an NSG/NOG background (and overcoming the issues seen with poor adaptive immunity and specificity in colitis models), Dr. Smith was able to tie in the use of colitis models for drug discovery for UC and CD. Dr. Sundrud provided a different perspective examining the role of other factors such as bile acids in the development of colitis and IBD. Robert O'Connell and Julie White spoke to the practicality of running these models for IBD research.

To summarize the event, there were in-depth conversations discussing the promising opportunities to develop mouse models for IBD research. The theme that rang true throughout the workshop is that there is not one single model that captures every aspect of colitis and IBD in humans. Each model has its strengths and weaknesses and does an adequate job of displaying one or more mechanisms seen in human IBD. Download the meeting report for specific details.