AcceptShow Options
eTACONIC
Megan M. MacBride, PhD
Tuesday, January 26, 2016
Facebook  Twitter  Linkedin  print  rss
Dozens of papers have demonstrated the utility of the CIEA NOG mouse® for human immune system engraftment. Several systems are commonly used for human immune engraftment, each with their own advantages and disadvantages. Human hematopoietic stem cells can be engrafted to generate huNOG mice, which support long-term differentiation of multiple cell lineages. A simpler system is the huPBMC-NOG, in which mature human peripheral blood mononuclear cells are engrafted into a NOG mouse as a short term model, primarily for studies of T cell function. The existing models have limitations, particularly in the engraftment, differentiation and function of particular cell types.

The scientists at the Central Institute for Experimental Animals (CIEA) in Japan not only developed the NOG mouse, but have been working for the past several years to generate next generation models which improve upon the state of the art in immune system engraftment. One of the problems identified in supporting proper human immune cell differentiation is that some cytokines produced by the host mouse have limited cross-reactivity to bind cognate human cytokine receptors, and consequently limit differentiation of some immune cell lineages. This problem can be overcome in a number of ways. Human cytokines can be exogenously administered or expressed via hydrodynamic plasmid injections, but that requires additional experimental manipulation of every study animal. Another approach involves transgenic expression of human cytokines. The CIEA has developed a number of such models based on the NOG mouse. 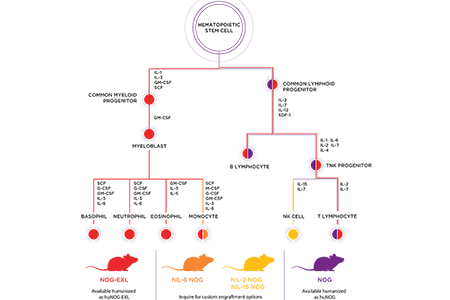 A limitation realized early on by the field is the low number of myeloid cells in the huNOG. Several cytokines participate in myeloid cell lineage commitment, including GM-CSF and IL-3. CIEA generated a NOG mouse that expresses both human GM-CSF and human IL-3 [NOG-EXL (hGM-CSF/hIL-3 NOG)]. Upon HSC injection, this mouse supports higher overall levels of human cell engraftment as well as higher levels of myeloid cell differentiation compared to the NOG mouse. The hGM-CSF/hIL3-NOG mouse may thus be more suitable for applications requiring myeloid cells, such as allergy or immuno-oncology research related to macrophages, monocytes and their derivatives, including myeloid-derived suppressor cells (MDSCs).

No perfect mouse model of the human immune system exists. But researchers now have more options than ever for choosing a model that fits their scientific question.