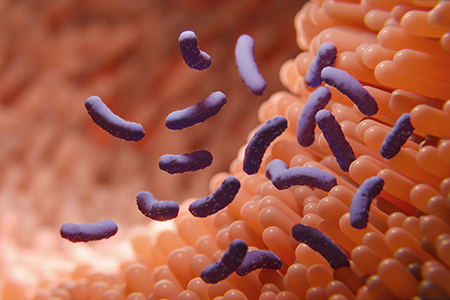 Mdr1a knockout mice are becoming a more frequently utilized colitis model in IBD research due to their translational relevance, microbiome-driven chronic phenotype of colitis, and presence of a functional immune system. However, the primary mechanisms by which colitis appears in the Mdr1a KO mouse are not fully understood. MDR1 is a drug and xenobiotic efflux pump with substrates ranging from steroids to glycolipids1. There are two genetic forms of the protein in the mouse (Abcb1a and 1b or Mdr1a and 1b), while humans (ABCB1 or MDR1) only have one2,3. Expression of Mdr1a is highest in the membrane of absorptive colonocytes, and the presence of the transporter is critical for maintaining intestinal homeostasis through reducing drug absorption and accumulation or elimination in the gut2,4.

Molecular mechanisms of colitis in the Mdr1a Knockout Mouse

Mdr1a knockout mice typically develop colitis between 8 to 36 weeks of age. The Mdr1a model presents an interesting story for the molecular mechanisms of colitis compared to other IBD models. Mdr1a mice have a defect in epithelial cell barrier function, which leads to an inability to eliminate the products created by the commensal microbiota (Figure 1)5. Accumulation of these microbial products leads to increased antigen presentation to T cells and considerable hyperactivity. This presents a unique mechanistic phenotype that highlights the importance of targeting the microbiome for therapeutic treatment6. However, this is not the only mechanism of spontaneous colitis in the model. One of the more interesting areas of investigation is the ability of other intestinal metabolites transported by Mdr1a to contribute to the phenotype. Bile acids have been shown to increase intestinal inflammation and modulate Mdr1a function and T effector cells in the intestine7,8. More importantly, the presence of Mdr1a mitigates oxidative stress caused by bile acids on T cells9,10. This presents a colitis mechanism by which loss of Mdr1 prevents intestinal homeostasis by leading to increased oxidative stress, mitochondrial dysfunction, and promotion of inflammation through T cell-mediated colitis11,12. This implicates not only the microbiome but also T cell-driven inflammation and mitochondrial dysfunction as the disease mechanism leading to or worsening epithelial barrier function in Mdr1a KO mice9,13.

Similar to other models, the colitis phenotype is also further aggravated by the presence of pathogenic infection, such as with Helicobacter1,4,14. Therefore, the health profile at an animal facility becomes an important factor in the development of colitis in these mice (Table 1)4. Other environmental insults, such as Dextran sodium sulfate and piroxicam, have also been utilized to induce spontaneous colitis in these mice15. Similar to the Il10 knockout model of IBD, Mdr1a knockouts on different inbred strain backgrounds have varying colitis susceptibility. In Mdr1a knockouts, this may be associated with strain-specific differences in the expression of cytokines and other inflammation-related genes15. For the Mdr1a KO model, FVB mice are genetically more susceptible to permeability changes in the intestine due to loss or aberrant function of Mdr1a and are therefore the most appropriate strain for these studies15.

Histopathological changes in Mdr1a KO mice include a defective mucus barrier due to loss of goblet cells along with increased inflammation from mucosal thickening16. There are also CD4+ T (and other inflammatory) cell infiltrates and crypt abscesses in the colon16. Intestinal inflammation develops at ~12-16 weeks and the pathology is similar to human disease12,17. Mdr1a KO mice have increased levels of myeloperoxidase (a neutrophil accumulation marker) and pro-inflammatory cytokines IL8, IL12, IFNγ, TNFa, and IL1b4,15. Animals present with dysregulated epithelial cell proliferation and leukocyte infiltration of the lamina propria in the large intestine12,17.

The Mdr1a KO mouse presents with high construct, face, and predictive validity for the study of human IBD and the development of therapeutics. Polymorphisms in MDR1 are strongly associated with ulcerative colitis in humans, and loss of expression has been implicated in the development of the disease3. Barrier dysfunction is very common in human IBD patients, and defective antimicrobial mechanisms and loss of microbial sensing (through TLR2) have a role in Crohn's disease and human ulcerative colitis18-20. Mdr1a KO mice also serve as a platform for investigating cytokine networks (e.g., IL2, IL12, IL17, IL23) and T cell (CD4+, Tregs) involvement in IBD21. Mdr1a mice treated with IL17 neutralizing antibodies have exacerbated colitis while mice treated with IL23 neutralizing antibodies have an attenuated phenotype22. Similar to human clinical outcomes and treatment of ulcerative colitis, studies in Mdr1a mice showed effective treatment of colitis with both anti-IL12 and IL-23 blockades4.

The Mdr1a KO mouse model is a very useful tool for preclinical IBD research which has been applied across basic and applied studies. This model has high translational utility due to the parallel of molecular mechanisms of the disease (barrier dysfunction, microbiome involvement, and inflammation) to those in humans and the clinical relevance of therapeutic efficacy in this model. Further investigation into Mdr1a's evolutionary role in the colon and as a transporter should be determined in this model. Additional investigation should also explore the expression of Mdr1b in the colon and its potential role in the colitis phenotype.