AcceptShow Options
eTACONIC
Taconic Biosciences
Thursday, July 23, 2020
Facebook  Twitter  Linkedin  print  rss
Dr. Philip Dubé of Taconic Biosciences presented a recent webinar on genetically engineered models (GEMs) of colitis, which are widely used for preclinical research on inflammatory bowel disease (IBD). Although a wide array of GEM colitis models exist, Dr. Dubé focused on a few models which are both most commonly used and most useful for drug discovery. He discussed the relevance of the disease mechanism in each model and covered important experimental considerations based on both his long personal experience using colitis mouse models as well as feedback from pharma and biotech researchers in the field.

Time constraints prevented discussion of all submitted questions during the Q&A period. We present a full Q&A here, including the great discussion between Dr. Dubé and moderator Dr. Terina Martinez regarding the parallels between IBD and Parkinson's research.

Dr. Philip Dubé: I kind of glossed over the chemically induced models in this talk, and I think they certainly have their place. However, just as you pointed out, these are largely used because of all the lack of constraints. You can do DSS in any type of mouse. With TNBS you are limited to certain genetic backgrounds. Say you have a gene knockout, and you're trying to understand the role of this gene and disease. It's very simple just to take that animal and give it some DSS. So I think that really has led to the proliferation of that particular model in the research community more so than a real scientific justification for using that model. I've seen a lot of pushback for using some of those chemically induced models. This comes at the level of grant and journal reviewers. In the academic segment, it's getting much more difficult to publish a study based simply on DSS. If you're proposing a grant, and the only thing you're proposing is DSS, then that's going to be a problem because there are some real limitations on the level of validity of that model.

You can go through that same exercise: predictive, face and construct validity. Is DSS very predictive? In this case, DSS doesn't respond to many therapeutics. To my knowledge, the only therapeutic that works consistently as a positive treatment control in DSS is something like cyclosporine A. A lot of the biologics don't work. It's a very acute model. You can make that more clinically relevant, potentially by doing it in a chronic fashion. But it's kind of more of a repeated injury model.

From the perspective of drug development in the for-profit sector, people just aren't willing to face going to clinic solely off of DSS data. I showed the increasing spectrum that these companies are using to evaluate their therapeutics. They're going to still do DSS because it's cheap and quick, but in addition to that, they're going to use as many models as they can to really get good confidence that there isn't something specific to any one model that would lead you to think that your drug is either going to be successful or unsuccessful. 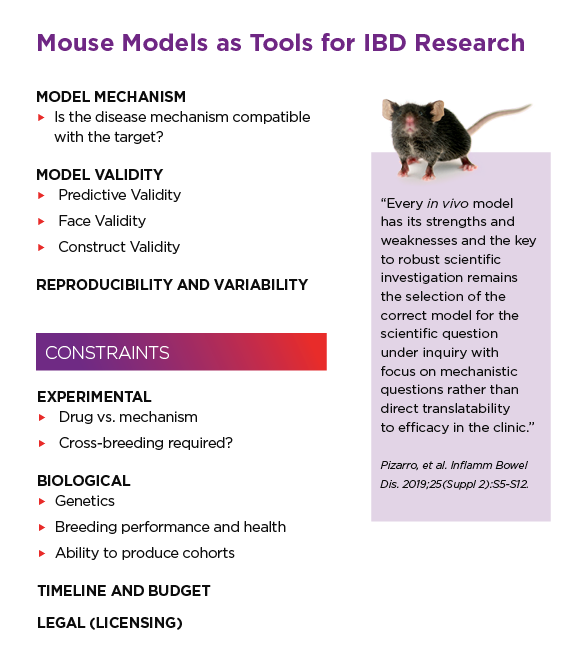 PD: DSS is thought to interact with medium chain fatty acids in the colon to produce basically micelles that physically injure the colon epithelium. So, in that respect, there probably could be an interaction between bacterial fermentation, for example, and how DSS is forming the injurious micelles. Is it directly affecting the microbiota? It's probably likely; in a DSS experiment you're giving animals quite a high dose of dextran sulfate. I don't know offhand whether it's a direct interaction.

The role of the microbiome in colitis

PD: This has been a real limitation in the field. There are some quite famous examples of data that hasn't been reproducible, in that a "gene effect" really had to do with cage to cage variability and inherited microbiome between a knockout line versus a wild type line. And I think probably the reverse is also true. Is a microbiome driven phenomenon actually due to the microbiome or is that due to some effect of genetics?

Ultimately, just like in people, we know that there is a relationship and cross-talk between the genetic background and the microbiome driving disease. There's no real straightforward way to tease those apart. So it depends on how much you want to invest in in teasing apart that mechanism. Co-housing is an imperfect solution but it is an approach. We know that co-housing animals together when possible can at least normalize their fecal microbiome. Whether or not you're getting normalization at the luminal surface is probably another question — there's some data that co-housing is not effective. I mentioned just transferring dirty bedding, and that's a quick and dirty solution. Other, more complex approaches include cross fostering between different lines and going right to germ free. If you go right to germ free, you take that out of the equation and then you can normalize your microbiome across different genotypes and different groups. I think that is ultimately going to be the the gold standard in figuring out the contribution from those two different factors. PD: We do not currently have germ-free Mdr1a knockouts. It requires a lot of resources to not only derive an animal germ-free, but to maintain it germ-free over time. We've been getting a lot of requests for germ-free Il10 knockouts, so that made it possible for us to maintain that over time. We have generated Rag2 knockouts germ-free in the past as well. We just haven't done Mdr1a yet. If someone's interested in looking into that as a potential model, please feel free to call us up. PD: As I mentioned, most models do not faithfully recapitulate any ileal involvement, and they differ in terms of fibrosis as well as other aspects of stricturing disease, etc. The SAMP1/Yit model has been used in this regard. I also think that the Mdr1a model might potentially look promising in that respect. We just don't really have a lot of data on that yet. I think, in terms of the microbiome, there's a lot of power in looking at Il10 knockouts here. You're going to be restricted to the colon, but it's going to give you a tool to study that mechanism. I think the same could be said, for a Rag2 knockout, although that might be a little bit more challenging. A lot of this work has been done with the DSS model. DSS can be used under a gnotobiotic setting. It's a challenging model because the microbiome is not one of the major factors. It certainly can influence disease but a germ-free mouse will still develop colitis in response to DSS. So that makes me question the exact involvement of the microbiota, and it may not be the most relevant. I know there's been a lot of work by Christian Jobin and others looking at Il10 knockouts and using those as a tool. PD: We would expect that germ-free BALB/c Il10 knockouts would have exacerbated disease compared to the B6 Il10 knockouts. We have some ongoing collaborations to look at that, but the data isn't available yet. PD: There are at least 6 different genetic loci that determine whether a mouse strain is susceptible (e.g. C3H or BALB/c) or resistant (e.g. C57BL/6) to developing colitis in the Il10 knockout background. These various loci include genes that are known to regulate immune responses, epithelial barrier function/restitution and host-microbial interactions. Although we tend to think of the Il10 knockout as a monogenic model, the disease phenotype actually does require contributions from other genetic modifiers and the environment. PD: Certainly in this case the fecal microbiota from a specific pathogen free C57BL/6 mouse was sufficient. In the study that I showed, we simply collected fresh feces from a specific production location that at Taconic, pooled the samples, made a fecal slurry and gavaged the animals. That was sufficient. Would fecal matter from a BALB/c induce more disease? I don't really know. I think the effect of strain background on the microbiome profile of a mouse is probably more related to where they were produced versus their genetic background, but, I'm not really convinced based off of any data that I'm aware of that BALB/c microbiome would drive more disease.

PD: This is the problem with any of the spontaneous models. We house and raise the Il10 knockouts at Taconic under very, very clean conditions. Under very, very clean conditions, these animals typically tend not to develop disease. The latest we've looked is, I believe, out to seven or eight months of age. And we can only see very, very minor signs. We think that's because the microbiome of these animals in our production location is quite minimal.

What does that mean for your research? When you bring this into even the cleanest pharmaceutical vivarium, the microbiome there tends to be much more diverse versus that at our clean-room production facilities. Our production practices require stringent personal protective equipment including powered air purifying respirators with strict environmental controls. That helps in a number of respects. It allows us to be able to produce large numbers of these animals to do studies. The fact that you're switching them from a very, very clean environment to a slightly less clean environment and exposing them to more microbiota probably helps accelerate the disease. Kind of like a light version of the germ-free. We've come across this issue in breeding with other types of models. One of the more notorious models in this regard is the SAMP1Yit spontaneous colitis model. That model will in a very similar fashion to the Il10 knockout develop spontaneous disease, but it's really hard to breed them unless you keep them germ-free. That's typically what has to be done for that particular model and it's not a scientific rationale. It's a practical concern of simply being able to produce enough mice to do your study.

Selection of the most appropriate IBD model

PD: The short answer is that no single model can fully recapitulate all aspects of IBD, and, as you rightly point out, IBD is not a single disease but a spectrum of related, overlapping, and distinct disorders. Animal models by nature are reductionist systems that allow you to test hypotheses and understand aspects of disease pathology. There are aspects of each model that mimic certain features of human pathology, but which is best? As discussed in the webinar, you have to consider the validity of any model in terms of predictive, face and construct validity — and each will have its strengths and weaknesses in this regard. Single gene knockouts only impact one pathway directly, but the disease phenotype does rely on other environmental (i.e. microbiome) and genetic modifiers (i.e. strain background). If controlled properly, this will provide you with a defined and reproducible system for testing therapeutic agents. By using multiple different models, this will help to understand how different pathways interact with the test agent. Chemically-induced and polygenic models have their own strengths and limitations. At the end of the day, no single model is going to be representative of the full spectrum of IBD patients. For translatability, we cannot currently rely on one single model, and I think the research community needs to be open to informing IBD model selection, and refining these models, in response to findings from clinical trials.