The typical structure of breeding colonies for inbred strains of mice and rats at Taconic can be represented as a pyramid. The colonies are designed to avoid accidental crossbreeding, to minimize genetic drift, and to prevent the development of potentially genetically distinct substrains. At the top of the pyramid is the relatively small Foundation Colony (FC), shown here as being derived from a pair of genetically tested Common Ancestors. At the base of the pyramid is the large Production Colony (PC), and in between are the two types of expansion colonies, the Pedigreed Expansion Colony (PEC) and the Expansion Colony (EC). 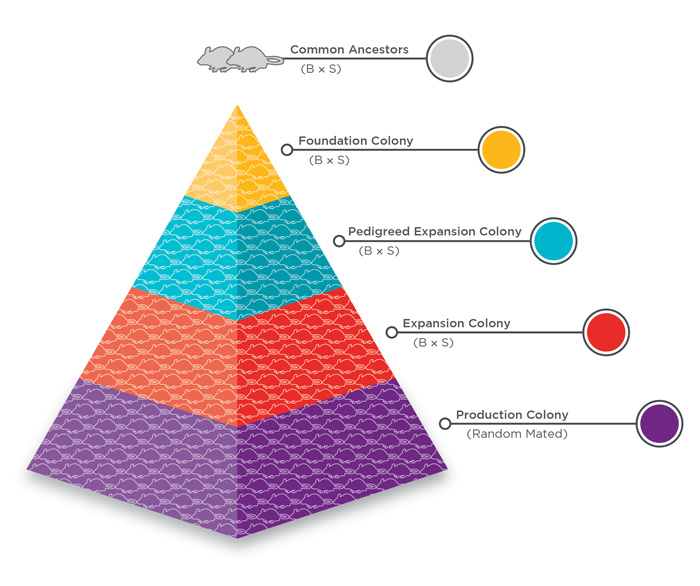 The FC is the only self-perpetuating colony (i.e. it produces its own new breeders), and all matings are brother x sister (BxS). The pedigreed expansion colony is an extension of the Foundation Colony and receives all of its breeders from it; all matings in the PEC are also BxS. The PEC produces breeders for the Expansion Colony (EC), where Taconic once again utilizes BxS matings. The EC produces breeders for the Production Colony (PC), where random mating is utilized to scale up breeding for production of animals that will be shipped to customers. Consequently, inbred mice or rats obtained from Taconic's Germantown PC are in most cases not more than five BxS generations removed from the foundation colony.

This standard pyramid management plan, when strictly adhered to, minimizes the risk of genetic drift even when multiple PCs are maintained at geographically distinct production sites. This strain harmonization is evident for all Taconic production sites. Each site has its own PEC, but standard operating procedures require that the site receive a new PEC from the Germantown FC every two years (approximately every four generations). Thus, no animal supplied from Taconic production sites can be more than 10 BxS generations removed from the strain's current Foundation Colony, which, at present, is housed in the Germantown Gnotobiotic Center.