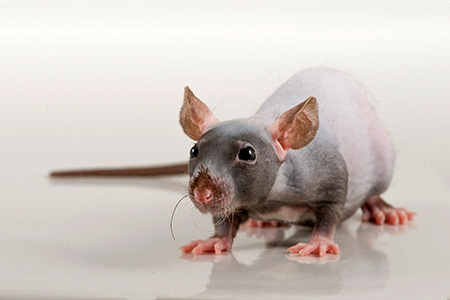 Recently, a novel rodent polyomavirus, rat polyomavirus 2 (RPyV2), was discovered. This new agent was isolated from a colony of highly immunodeficient rats which developed clinical illness, including emaciation, labored breathing and mortality, particularly among breeding females and pups.

IDEXX BioResearch, working collaboratively with the affected academic institution, was finally able to identify the cause as a novel rat virus, which they named Rattus norvegicus polyomavirus 2 (RPyV2). "We ran full diagnostics panels on the initial samples, but everything came up negative. The histological data clearly showed lesions in tissues such as the respiratory tract and salivary glands, but it wasn't until we went to sequencing that we identified a likely cause," said Dr. Matthew Myles of IDEXX.

A Deeper Look at Rat Polyomavirus

Polyomaviruses are double-stranded DNA viruses which infect birds and mammals. In the laboratory animal world, the polyomaviruses that have generated the most concern are mouse polyomavirus and the K virus. Mouse polyomavirus can be tumorigenic, whereas K virus is associated with respiratory disease and death in newborn mice.

Testing by IDEXX among samples submitted for routine diagnostic testing reveals a prevalence of 32% in North American rat research colonies.
To date, clinical illness has only been associated with RPyV2 among immunodeficient rats such as nude or scid rats. In such immunodeficient models, disease can be severe, including tissue degeneration and death. The apparent susceptibility of breeding females and pups could have a big impact on immunodeficient breeding colonies.

In immunocompetent animals, no clinical illness has been observed, but an antibody response develops within two weeks of infection.

Transmission may occur through direct contact such as co-housing, as the virus sheds primarily in respiratory and salivary secretions. Fecal-oral and sexual transmission may also occur, and infectious virus has been isolated from the feces of infected rats. "Studies are ongoing to better understand transmission and disease course," said Dr. Myles.

Taconic scientists were in early consultation with IDEXX after it became clear a novel agent was on the scene. "We were able to quickly screen our rat colonies by simply adding an additional assay to our normal health testing schedule," according to Dr. Paula Roesch, Director of Health Diagnostics at Taconic. "The good news is that the screening showed our commercial rat colonies in the US and Europe, including our immunodeficient rats, are negative for this new virus," said Dr. Roesch. "We think that's due to our strict bioexclusion practices, designed to keep out viruses of all types."

What RPyV2 Means for Veterinarians and Colony Managers

This discovery of this new virus was only announced in October, so additional investigation is needed. Researchers using immunocompromised rats are likely to be most concerned due to demonstrated clinical illness in that population.

Dr. Myles predicts that some small percentage of animal facilities will aggressively test for and exclude the agent, while the broader majority take a more measured approach, waiting to see what additional data is reported and for the field to come to a consensus before implementing new testing or exclusion measures.

Until that consensus emerges, users of immunodeficient rats may opt for a middle road: sourcing their rats from unaffected colonies and using housing and husbandry means designed to deter viral infection. Taconic recommends consultation with your facility's lab animal veterinarian for additional discussion.