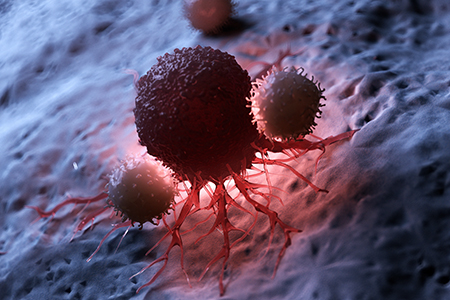 Immunogenic tumor cells often display protein antigens at their surface, which can be recognized by T cells and serve as a signal for T cells to attack the tumor. However, one long-standing paradox is that tumor-specific T cells often co-exist with the tumor cells. If a T cell has already recognized the tumor cells, why can't the T cell kill them at an early stage?

In a recent study published on eLIFE1, researchers from Memorial Sloan Kettering Cancer Center investigated this question using a new technique, PresentER, where they constructed "mixed tumors" with millions of cancer cells each displaying a different antigen. The original goal was to identify antigens which provoked a strong immune response.

Surprisingly, they found that instead of the nature of the antigen, it is the clonal fraction, i.e., the percentage of cells bearing each antigen, that determines the successful clearance of immunogenic tumor subclones by T cells.

The researchers started the investigation by testing if individual antigens can be effectively displayed by the PresentER system. They injected previously known immunogenic and non-immunogenic murine cancer cells separately into wild type C57BL6/N (B6) mice and immunodeficient Rag2 knockout mice and found that immunogenic cancers were depleted only in wild type mice.

To test if the activated T cell specifically kills immunogenic tumors, the authors mixed mCherry-labeled immunogenic cells with eGFP-labeled non-immunogenic eGFP cells (both derived from the C57BL/6 strain which carries the Cd45.2 cell surface marker) and injected them into congenic Cd45.1 mice.

After several weeks of growth, the authors were able to harvest and analyze cancer cells using anti-Cd45.2 antibody. They found that the immunogenic subpopulation was effectively eliminated, whereas the growth of non-immunogenic cells was not affected. Thus, the immune system is capable of recognizing and selectively depleting immunogenic tumor subclones.

The same conclusion, however, did not hold, when the authors injected the mixed library of syngeneic tumors. A mix of ~5 x 106 cells containing a total of 5,000 MHC-I antigens was injected into wild type C57BL/6N mice. After several weeks of growth, tumor cells were harvested and analyzed. Surprisingly, cells bearing strong immunogenic antigens, including the positive control from the previous experiment, were able to survive the immune surveillance. Even in pre-vaccinated animals, immunogenic tumors could still be detected.

This observation leads to the hypothesis that it is the antigen heterogeneity, rather than specific antigen, causes the failure of immunogenic tumor rejection.

By injecting a mixture of immunogenic and non-immunogenic cells at various ratios, the authors revealed that when immunogenic tumor cells comprised less than 1% of the total population, these cells could not be eliminated by the immune system.

To understand whether tumor escape is due to low quantity of each antigen, the authors first grew the library tumors in Rag2 knockout mice to increase the total tumor cells. The tumors were then harvested and transferred into wild type B6 or Rag2 knockout mice. Increasing the total amount of tumor injected at 40 to 100-fold did not lead to complete depletion, suggesting that it is the low percentage of cells bearing each antigen that caused the failure of T cell clearance.

The study revealed that antigen heterogeneity can impact the immune elimination of cancer cells. The model explains the inverse association of survival and tumor neoantigen clonality observed in human patients2,3 and sheds light on the design of immunotherapeutics.