Checkpoint inhibitors work indirectly. CAR T cells work directly, transforming a patient's own T cells into a therapy by improving their ability to bind and destroy cancer cells. This approach is referred to as a type of adoptive cell transfer therapy, because the patient's own cells are genetically modified and then transferred back into the patient. 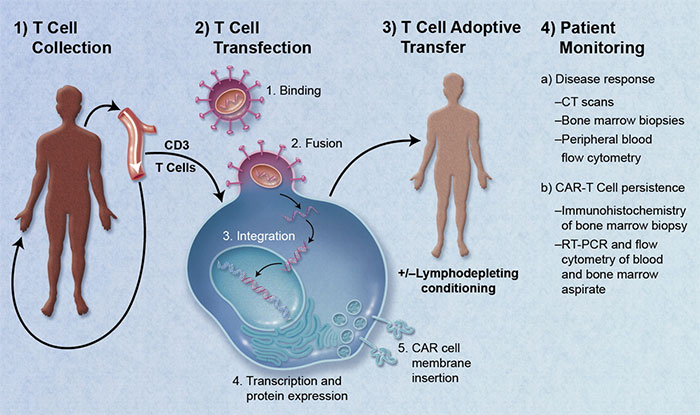 In August of 2017, Novartis received FDA approval for the first CAR T cell therapy, Kymriah™, which targets a form of leukemia. In three months, 83% of patients were in complete remission. These were patients that did not respond to other more traditional cancer therapies. Not long after the approval of Kymriah, Gilead Science's Yescarta® received approval from the FDA.

Unlike standard bulk drug manufacturing, CAR T cell therapy is made for each individual patient. A single injection of Kymriah can cost close to $500,0001.

CAR T cell therapy makes perfect sense: stimulate the body's ability to recognize and bind cancer cells. Yet, this improvement can also cause the patient's immune system to run amuck in a so-called cytokine storm — which can be fatal. These side effects have been implicated in deaths of some patients treated with CAR T. With a high cost and high risk, CAR T cell therapy is often a treatment of last resort.

Fortunately, scientists have begun to develop risk-mitigating technologies. Scientists are developing control systems that can turn the cells "off" if a cytokine storm is detected.

T cells multiply when they recognize antigens they view as foreign. With engineered T cells, this reaction can be even more powerful. While this might be beneficial — the more T cells that bind cancer cells, the better the chance of killing them — when T cells bind other cells, they release cytokines. Cytokines promote inflammation and attract more immune cells to the area. When this occurs, it can result in a fatal condition called a cytokine flare-up.

Biotech companies are developing ways to either control the T cell reaction or, if needed, turn it off. One company is Bellicum Pharmaceuticals based in Houston, Texas. Their "product candidates are differentiated by the inclusion of powerful molecular switches designed to eliminate, reduce or activate therapeutic cells, and thereby potentially provide greater efficacy and safety compared to the current generation of cell therapies." They have included molecular switches which can be controlled inside the patient by administering rimiducid, a small molecule.

Depending on the type of engineered molecular switch, administration of rimiducid can lead to T cell death, beneficial for patients that develop a cytokine storm, or rimiducid could cause proliferation of T cells with an activation switch.

Other technologies in development are focused on making CAR T cell therapy even more defined. Cell Design Labs (now owned by Gilead) engineered a receptor called synNotch into T cells. When the receptor binds a surface protein on the cancer cell, the receptor activates, prompting CAR production on the surface of the T cells.

Two recent findings published in Nature Medicine also highlight the need for including a kill-switch into CAR-T platforms in order to engineer a level of safety into cell therapies. Groups at Novartis2 and Karolinska Institute3 independently found that CRISPR/Cas9-edited cells are most efficiently modified when the proto oncogene p53 malfunctions.

This is important for three reasons:

This suggests a successful CAR-T therapy generated through CRISPR/Cas9 could unintentionally pass on a greater chance of the CAR-T becoming tumorigenic. Taken together, these new discoveries support engineering a fail-safe mechanism, like Bellicum's kill-switch, to mitigate this risk.

While T cells remain central to many ongoing immuno-oncology efforts, scientists are adapting T cell methodologies toward other immune cells types, such as NK cells. Examples include NK cell-engaging multi-specific antibodies and NK cells genetically engineered to have enhanced tumor-killing properties, much like CAR T cells.

These recent approvals have advanced the treatment of cancer in remarkable ways. Enlisting the patient's immune system to help battle cancer is just beginning and the future holds great opportunities.