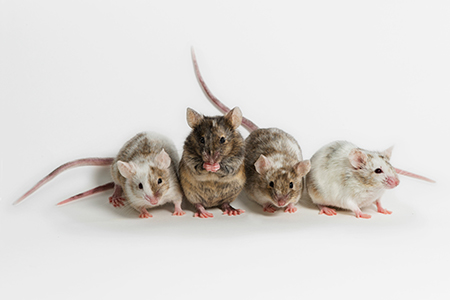 Most viruses have a narrow range of species in which they can establish an infection, for example, a virus that infects humans may not be able to infect laboratory research animals such as mice. This species-specificity presents researchers with a unique problem when studying human viruses. There are two means to address this — one is to modify the virus so that it can infect the target study animal, the other is to modify the animal to express a human protein that the virus recognizes. This Insight will focus on the former, the development of mouse models with modified proteins to enable the study of human viruses.

Viral specificity is dependent upon the interaction between the proteins on the viral particle surface and the host cell's surface receptor proteins. This interaction is highly specific, and if the two proteins are not able to bind then the virus will not internalize into the host cells. The novel coronavirus, SARS-CoV-2, also known as COVID-19, exemplifies this complex virus-host cell interaction.

While humans and mice share many of the same genes, the gene sequences (and the resulting proteins for which they encode) are not identical. Therefore, a virus that binds to the human version of a cell surface receptor is unlikely to be able to bind to the mouse version of the same protein with equal effectiveness. As a result of the 2003-04 SARS pandemic, multiple genetically engineered mouse models (GEMs) were developed to understand viral entry into human cells. From this research, it was determined that the SARS-CoV virus infects human cells through an interaction between the ACE2 cell surface receptor on host cells and the spike (S) protein on the viral particle. Therefore, to study the SARS virus, the host cell utilized must express a specific version of the ACE2 cell surface receptor, or it will not be susceptible to infection by this strain of coronavirus. Thus, the GEMs developed to study SARS-CoV contained human versions of the ACE2 cell surface receptor. Since the mechanism of infectivity for SARS-CoV-2 is similar to that of SARS-CoV, previous research efforts conducted towards understanding SARS-CoV may be applicable in studying SARS-CoV-2 as well.

In order to generate a GEM that is susceptible to infection by a human virus, a gene encoding the human version of a cell surface receptor is introduced into the mouse genome. These types of mouse models have been generated for decades and are critical to preclinical drug development. The timeline to generate a humanized GEM can range from 4-5 months to upwards of 15-18 months. The primary difference that dictates these timelines is the type of genetic engineering technique used to generate the modification.

Random integration transgenic mouse models can be generated within a timeframe of 4-5 months. This type of genetic modification is achieved through pronuclear microinjection of a pre-designed gene (or genes), which then results in the random integration of the gene into the mouse genome. The founder animals generated through this process must then be propagated to produce more mice for use in validation experiments to confirm the human transgene is being expressed, and at the levels and in the tissues that are of most interest.

Another technique that also produces GEMs in 4-5 months is CRISPR/Cas9-mediated gene editing. This method enables the generation of targeted modifications in a mouse gene with the intent to make the encoded protein more similar to the human protein. One benefit of using CRISPR/Cas9 is in the ability of this RNA-protein complex to introduce highly specific point mutations. Additionally, these modifications can be introduced to mice of different backgrounds, demonstrating how this genome editing technology can be more flexible than standard gene targeting technologies. Much like random integration transgenics, founder animals with CRISPR/Cas9 modifications must then be propagated and validated through a series of experiments to ensure the desired outcome of protein expression.

While both transgenic- and CRISPR/Cas9-generated GEMs can be produced in a relatively fast timeframe, these techniques are not always able to make complex modifications to the mouse genome. In cases where the goal is to insert a portion of or the whole human version of the gene into a specific location in the mouse genome, homologous recombination (HR) in mouse embryonic stem cells (ESCs) is the preferred method. These projects can take 10-16 months or more to produce a few mice that possess the desired modification. Again, the founders then need to be propagated to produce numbers to move into validation studies. However, HR in ESCs is the "gold standard" for generating quality GEMs, especially for complex humanizations.

Expanding Your Colony of GEMs for Viral Studies

Laboratories that are experienced in the management and propagation of GEMs can reduce the timelines for propagation almost down to the biological constraints of the time of mouse gestation (3 weeks) and sexual maturation (6-8 weeks) after birth. This results in the production of a new generation of mice approximately every 9-12 weeks. Timelines for this are dependent on how fast one can expand the GEM line into a colony that can produce cohorts and the overall timeline of the experiments themselves. Expansion alone could take at least three months, depending on the model. There are methods for natural breeding and tools such as in vitro fertilization (IVF) that can greatly accelerate expansion timelines when the original number of available breeder animals is limited. Ultimately, once the model is generated, it will be at least 9-12 weeks before small cohorts of animals are available for study, and the numbers will be limited for the first several months until a production colony of the model is established. This also assumes that the GEM exhibits the same fertility/fecundity as a wild-type mouse. However, this is not always the case with GEMs due to their genetic modifications, so this risk must be discovered and then accounted for.

There are specific methods that can be used to accelerate the breeding process of new GEMs. For example, IVF has been employed by model generation companies for the last 20 years and can greatly decrease breeding timelines when the original number of animals is limited. This technique allows for the generation of age-matched cohorts of 20 to>500 mice within the same week of birth.

When generating a new GEM using ESC-based gene-editing techniques, several steps can be taken to increase the likelihood of the mutation being transferred to the next generation, i.e., germline transmission (GLT). First, ESCs containing the desired mutation are injected into a donor blastocyst, which is transferred into the uterus of pseudopregnant foster mothers. The animals produced are called chimeras, which are the first mutant generation of offspring. Chimeras will contain tissues that are either derived from the modified ESCs or the native ESCs contained in the blastocyst. By assessing the presence of the targeted allele in sperm directly through genomic analysis, males can be selected that have incorporated the full mutation into their germline DNA. Then, by utilizing IVF, the sperm can be used to impregnate female mice, and an offspring birth date can be projected within three days. This greatly increases the probability of transferring the desired mutation to the next generation of mice and also decreases the time spent breeding chimeras and generating offspring. ExpressMODEL®, a novel approach to model generation developed by Taconic Biosciences, utilizes the techniques mentioned above. It allows for more predictable timelines than natural breeding and enables colony scaling to the desired number of animals for research studies, without compromising the upstream steps most vulnerable to errors and unforeseen risks. By leveraging Taconic's high success rates in gene targeting and chimera production with our capabilities in sperm cryopreservation, sperm gDNA analysis, and IVF, ExpressMODEL® achieves the industry's fastest timelines to study cohort with no compromise in quality.

When deciding which genetic modification technique to use to generate a humanized mouse, it is worthwhile to consult with model generation specialists to plan your project. All techniques mentioned above will produce viable animals for viral studies, but one technique will most likely be better suited for a project given the specifics of the research program. Research into COVID-19 is quickly advancing, and humanized GEMs are playing a vital role in understanding more about viral entry and pathogenesis and contributing to anti-viral and vaccine studies as well.

Taconic Biosciences has developed a Coronavirus (COVID-19) Toolkit that includes models with research relevance based on studies related to SARS (SARS-CoV).
Explore more about Taconic's: