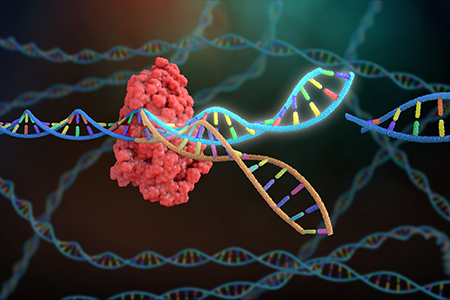 The application of CRISPR/Cas9 as a mammalian gene editing technology has tremendously matured over the last decade. This has paved the way for the development of CRISPR/Cas9 as therapeutic tool to treat human genetic disease, while making it easier to create the genetically modified animal models required to screen potential therapeutics.

Current clinical trials utilizing this technology focus on gene editing in somatic cells, which is different from germ-line gene editing in that the modifications in somatic cells are not heritable. The applications for which CRISPR/Cas9-based therapeutics are currently being tested in clinical trials can be categorized into cancer, infectious disease, and monogenetic diseases:

Most of the current clinical trials utilizing CRISPR/Cas9 are examples of ex vivo somatic cell gene editing, in which a patient's own cells are harvested and manipulated outside of the body before being infused back into the bloodstream. This strategy is in contrast with in vivo somatic cell gene editing, in which the components of the CRISPR/Cas9 system are directly delivered to a patient.

It is generally considered 'safer' to choose an ex vivo approach, as the edited cells can be screened before being placed back into the patient. However, for most monogenetic diseases, an ex vivo strategy is not feasible because the affected tissue cannot be cultivated outside of the body and/or effectively replaced. It is therefore important to continue to improve in vivo somatic cell gene editing approaches.

The clinical application of CRISPR/Cas9 relies on the ability to precisely and efficiently modify a human genomic sequence in a specific cell type of interest. On the molecular level, CRISPR/Cas9-based gene editing works through sequence complementarity of the single-guide RNA (sgRNA) with its target sequence in the genome, resulting in the ability of the endonuclease Cas9 to bind the protospacer adjacent motif (PAM) and induce a double-stranded DNA (dsDNA) break.

Hence, for preclinical studies to be most informative, the mouse genome would have to precisely reflect the human sequence to be targeted. For many genes, the mouse genome diverges too much from the human genome on the sequence level. To address this, researchers frequently choose to have a custom genetically engineered mouse model created that encompasses a human-like mutation, or preferably an entire human gene including a disease-causing mutation.

The ideal preclinical mouse model would have a mutated human gene replacing the endogenous mouse gene, resulting in mouse phenotypes reminiscent of the human condition. Such mouse models can be engineered using the traditional approach of homologous recombination in embryonic stem (ES) cells or using novel CRISPR/Cas9-based approaches to modify the mouse germline in ES cells or zygotes.

Learn more about the Taconic Biosciences' products and services supporting this field of research:

While current CRISPR-Cas9 clinical trials cover multiple disease categories, the number of trials is still limited. On the other hand, multiple preclinical studies covering a wide variety of in vivo somatic cell gene editing procedures have been published.

These studies involving genetically engineered mouse models can be viewed as an indication of what might lie ahead in modern medicine.

In this case, the approach relied on the error-prone dsDNA break repair pathway, non-homologous end joining (NHEJ). A double-stranded break at either side of a non-essential exon carrying the disease-causing mutation in the Dmd gene removed the exon and rendered the gene functional to generate a protein product.

A study by Ohmori et al. demonstrated that delivery of CRISPR/Cas9 gene editing reagents by hydrodynamic tail vein injection of AAV particles was able to correct a disease-causing mutation in the Coagulation Factor IX (F9) gene in the mouse neonatal liver4. Human mutations in this gene cause congenital hemophilia B.

The main technological improvement of this study was that besides the sgRNA and Cas9 sequences, a DNA repair template was delivered, allowing for specific repair of the mutant allele by homology-directed repair (HDR) of the induced dsDNA breaks. This repair mechanism to clean up dsDNA breaks is not error-prone, resulting in perfect replacement of the mutant allele by the wild type allele. This AAV-CRISPR/Cas9 treatment resulted in clinical improvement by restoration of hemostasis in the mouse model.

AAV particles have limited payload, which can be problematic for the delivery of Cas9, sgRNAs, and a DNA repair template. This limitation has been overcome by the delivery of dual AAV particles, one with the gene encoding the Cas9 protein, and the other encoding the sgRNA and a repair template. This dual AAV system was tested in a genetic mouse model harboring a point mutation in the X-linked gene Otc5. Mutations in the human OTC gene cause congenital metabolic liver disease, characterized by episodes of hyperammonemia. Following delivery of the dual-AAV system to neonatal mice, mutation-reversion was achieved in 10% of hepatocytes resulting in increased survival.

A fourth example of a genetically engineered mouse model used as a preclinical model for in vivo somatic cell gene editing is described by Wu et al. This study first reports using CRISPR/Cas9 in mouse zygotes to genetically engineer a germline mutation in Col7a1, which is an equivalent gene to the human mutation causing recessive dystrophic epidermolysis bullosa. This inherited condition results in blistering skin due to defective epidermis-dermis adhesion. Subsequently, the authors report an electroporation-based delivery method of Cas9/sgRNA ribonucleoprotein complexes to all layers of the neonatal mouse tail epidermis6. Introduction of these gene editing complexes resulted in exon-skipping of the exon containing the disease-causing mutation, leading to proper localization of collagen VII and an increase in epidermis-dermis adhesion in homozygous mutant mice.

The examples described in this Insight provide evidence that preclinical studies on CRISPR/Cas9-based in vivo somatic cell gene editing using genetically engineered mouse models mimicking the genetic nature of the human condition show highly promising results towards a cure for debilitating genetic diseases. However, besides side effects resulting from the delivery method, longer-lasting side effects as a result of gene editing infidelity may also arise.

The CRISPR/Cas9 components induce double-strand DNA breaks that may be repaired by the error-prone NHEJ repair pathway, causing unwanted sequence variability at the target site. Similarly, double-strand breaks may be induced at other sites in the genome, causing additional mutations with potentially harmful side effects, especially when induced in long-lived cell types, including tissue stem and progenitor cells. Characterizing the extent of such sequence variability and its contribution to causing side effects are essential outcomes of a preclinical study using mouse models.

There is tremendous momentum for the development of CRISPR/Cas9 therapeutic strategies to combat genetic diseases that were previously incurable. Genetically engineered rodent models reflecting the exact molecular genetic nature of the disease-causing human mutation are indispensable.

There are approximately 3,000 genes associated with Mendelian-inherited human diseases. Each of those genes could have a substantial number of disease-causing mutations and an even larger number of mutations with unknown effects that could potentially be harmful. Specific genetically engineered mouse models harboring such human mutations are pivotal for preclinical studies examining the efficacy of delivery, the efficacy of mutation-repair, symptom reduction or reversal, and potential adverse effects of the CRISPR/Cas9-based therapeutics.