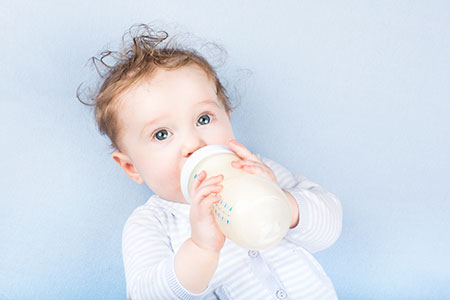 Breastfeeding versus formula feeding of infants can be a controversial subject. Those who believe the "breast is best" may be interested in a new study which reports that components in infant formula modify the establishment of a baby's gut microbiota.

How Formula Affects the Infant Microbiome

Earlier research has shown that gut microbiome varies between formula-fed and breast-fed infants. Now, researchers from the Technical University of Denmark have identified a role for fat and emulsifier types in this effect.

To study the effect of fatty acid types and emulsifiers on the infant microbiome, Nejrup and colleagues associated germ-free Swiss Webster mice with inoculum derived from a pooled fecal sample from healthy, breast-fed infants. The humanized microbiota mice were then maintained on a very low fat diet, with drinking water replaced with one of three types of lipid emulsions; the emulsions varied in emulsifier and/or fatty acid types and were meant to mimic the primary fatty acids and emulsifier present in either breast milk or formula.

This study extended previous work on breastfeeding by focusing on lipids and suggests that germ-free mice associated with infant microbiota may prove a useful tool to study gut colonization in babies.