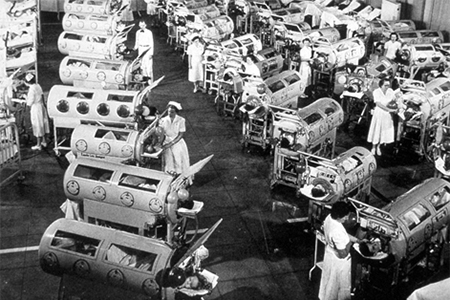 Humanity is on the verge of one of the greatest public health achievements in history — eradicating polio. The Global Polio Eradication Initiative (GPEI) has reduced polio cases by 99.9% since 1988, bringing the world closer than ever to ending polio for good. This means a world in which every child would be safe from the paralysis caused by the virus.

Poliomyelitis (polio) is a highly infectious disease caused by a wild poliovirus that can consist of three serological types (type 1, 2 or 3). It invades the nervous system and can cause paralysis, or even death, in a matter of hours. Polio enters the body through the mouth, in water or food that has been contaminated with fecal material from an infected person. The virus multiplies in the intestine and is excreted by the infected person in feces, which can pass on the virus to others. Polio mainly affects children under the age of five years, although adults can be also susceptible to the virus at a later stage of their life.

There is no cure for polio. Polio can only be prevented by immunization.

In the early 20th century, polio was one of the most feared diseases in industrialized countries, paralyzing hundreds of thousands of children every year. Soon after the introduction of effective vaccines in the 1950s and 1960s, however, polio was brought under control and practically eliminated as a public health problem.

GPEI is a public-private partnership led by national governments with five partners — the World Health Organization (WHO), Rotary International, the US Centers for Disease Control and Prevention (CDC), the United Nations Children's Fund (UNICEF), and the Bill & Melinda Gates Foundation. Its goal is to eradicate polio worldwide. In 1988, when the GPEI began, polio paralyzed more than 1,000 children worldwide every day. Since then, more than 2.5 billion children have been immunized against polio thanks to the cooperation of more than 200 countries and 20 million volunteers, backed by an international investment of more than US $14 billion. There are now only three countries (Afghanistan, Pakistan, and Nigeria) that have never stopped polio transmission and global incidence of polio cases has decreased by 99%. However, tackling the last 1% of polio cases has still proved to be difficult.

Conflict, political instability, hard-to-reach populations, and poor infrastructure continue to pose challenges to eradicating the disease. Until poliovirus transmission is interrupted in these countries, all countries remain at risk of importation of polio, especially vulnerable countries with weak public health and immunization services and travel or trade links to endemic countries.

If polio is not eradicated now, there could be a resurgence of up to 200,000 cases annually within a decade. The world would also risk losing the US $50 billion in estimated savings that eradication would generate over the next 20 years.

Learn more about Taconic Biosciences' products and services supporting this field of research: 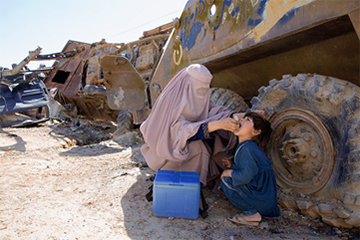 To protect global progress, the program vaccinates more than 400 million children across sixty countries every year and conducts disease surveillance in more than seventy countries. Since 2001, there have been wild polio outbreaks in forty-one countries that were previously polio-free. While each outbreak has been stopped, each one is a reminder that as long as polio exists, every country—and every child—is at risk.

Vaccinators are steadily reaching more children than ever by engaging local communities and vaccinating at strategic locations such as markets, cross-border points, and camps for internally displaced people.

The strategy for the eradication of polio rests on immunizing every at-risk child until there is no one left for the disease to transmit to and the disease eventually dies out.

Prior to its release each batch of vaccines must undergo full testing by the manufacturer, and the test results are reviewed by the National Regulatory Authority for biological substances (NRA) of the country where the Oral Polio Vaccine (OPV) is produced. In addition, the National Control Laboratory conducts a battery of tests on randomly selected batches.

Each OPV batch undergoes a neurovirulence test in transgenic mice susceptible to polio to ensure efficacy. The only WHO-approved strain is the TgPVR mouse line developed and produced in Japan. Access to the transgenic mice is tightly controlled and they are distributed by Taconic Biosciences, Inc. Taconic also serves as the backup production provider, as a contingency to ensure TgPVR world supply in an emergency.

The Gates Foundation has provided a large portion of the funding for global polio eradication efforts. Bill Gates said, "[...] The success of the polio eradication program in India and ninety other countries gives me confidence that we can triumph in these final challenging countries [Afghanistan, Nigeria and Pakistan] and end polio once and for all."

Taconic also has expertise in immuno-oncology; Download the Taconic Biosciences' White Papers to read more about those models: