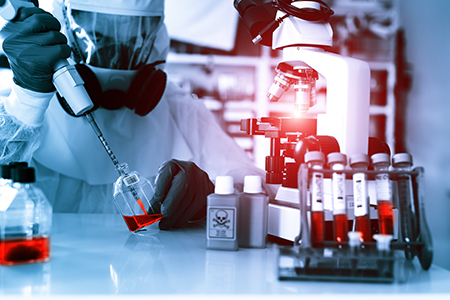 On Wednesday, July 17th, 2019, the World Health Organization (WHO) declared the Ebola outbreak in the Democratic Republic of the Congo (DCR) to be a Public Health Emergency of International Concern. This outbreak was originally declared on August 1, 2018 in Mangina, one of the most populous locations in the country.

Since then, the outbreak has been classified as a level 3 emergency, which is the highest-level classification from the WHO. As of September 19, 2019, there are over 3,100 confirmed cases of Ebola and at least 2,100 deaths have been attributed to the virus1.

Here's what you need to know:

What is the Ebola Virus?

The Ebola virus is a single-stranded negative-sense RNA viruses from the genus Ebolavirus. The virus causes a hemorrhagic fever, which is defined as a fever accompanied by internal and external bleeding caused by a viral agent.

How is Ebola Transmitted?

The virus is transmitted by direct physical contact through the sharing of bodily fluids and has an R0 of 2. This value represents how many people one infected person is likely to infect given the method of transmission and persistence of the virus outside the human body.

While Ebola has a much lower R0 than measles, which has an R0 of 18, it is not any less concerning as a public health crisis. The measles virus can spread through the air and Ebola cannot, however, most patients that contract Ebola will die faster due to the excessive fluid and blood loss associated with the infection2.

The average fatality for Ebola disease (EVD) cases is 50%, with estimates ranging from 25% to 90% based on previous oubreaks. Signs of Ebola may appear anywhere from two days to three weeks after contracting the virus.

As the disease progresses, later symptoms begin to overlap with the initial symptoms4:

How is Ebola Infection Treated?

When symptoms first appear, IV fluids and medications to reduce pain and fever are administered immediately. Since these early symptoms can mimic other infections, such as malaria or the flu, it is important to ask patients about locations they may have previously visited and come in contact with the virus.

As the disease progresses, multiple medications and blood transfusions are used to prevent excess fluid loss and drops in blood pressure.

The most widely used experimental treatment is called ZMapp, which is a cocktail of three monoclonal antibodies that bind to and subsequently inhibit the replication of the Ebola viral particle.

Clinical trial #NCT03719586 aims to compare the efficacy of three additional drugs to that of ZMapp, which are: mAb114, REGN-EB3, and Remdesivir. mAb114 is a monoclonal antibody, which functions as an inhibitor of the binding event between viral particles and host cells. REGN-EB3 is a cocktail of three antibodies, and Remdesivir is an anti-viral nucleotide prodrug5,6. The broad-spectrum small-molecule antiviral drug BCX4430 is enrolled in phase I of the clinical trials process.

How Can Ebola Infection be Prevented?

Ebola is a very rare disease in the US and most recent cases were acquired by people who had traveled to countries where the disease was present at higher levels. If travel to countries surrounding the DRC is required, there are certain preventative measures that can be taken to lessen the chances of contracting the virus7:

Is There a Vaccine for Ebola?

There is currently no vaccine approved by the US FDA to vaccinate against Ebola. However, a vaccine called rVSV-ZEBOV was developed and used in two locations in the DCR throughout this current outbreak.

While this vaccine is still under investigation, it is being used under "expanded access" for the locations affected by the Zaire strain of the Ebola virus8. The vaccine has shown promise, with no cases of Ebola present in a large cohort of vaccinated individuals ten-days post-vaccination9.

4. Clinical management of patients with viral haemorrhagic fever: a pocket guide for front-line health workers. WHO. (2016).

8. Preliminary results on the efficacy of rVSV-ZEBOV-GP Ebola vaccine using the ring vaccination strategy in the control of an Ebola outbreak in the Democratic Republic of the Congo: an example of integration of research into epidemic response. World Health Organization (2019).