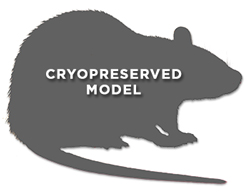 The hTH-GFP rat was developed in collaboration between The Michael J. Fox Foundation, Thomas Jefferson University, and Taconic. DNA fragments including 10.794 kb of the distal hTH promoter and 1.168 kb of proximal hTH promoter were ligated and placed upstream of the GFP reporter gene to create the hTH-GFP construct. The model was created through pronuclear injection of the hTH-GFP construct into NTac:SD zygotes. Founder line 12141 was bred to NTac:SD. The colony is maintained by mating transgenic females with SD:NTac males.

Conditions of Use for hTH-GFP Rat

The hTH-GFP Rat Model may be purchased by for-profit or non-profit users under the following label license (no signatures required).

The hTH-GFP Rat Model (“Model”) is produced and distributed under rights to patents and/or intellectual property owned by or licensed to the Michael J. Fox Foundation (“MJFF”) and Taconic. Taconic has rights to distribute the Model on behalf of MJFF. MJFF maintains ownership of the Model and permits the sale of such model to each purchaser that agrees to the Terms and Conditions of the Sale and following terms of use:

This model is available for cryorecovery. A deliverable of 4 mutant rats is available 14-16 weeks after order for $10,000 / €9100. Fees for Taconic Transit Cages and freight are in addition to this price.