AcceptShow Options
NEW MODEL: Jh mouse on B6 background Learn More
eTACONIC
Janell Richardson, PhD
Wednesday, January 2, 2019
Facebook  Twitter  Linkedin  print  rss
Animal models have led to significant leaps in understanding and advancement in human medicine. They are essential for drug discovery and connecting hypothesis-driven benchwork to the patient. However, scientists have struggled with how to define the value of a given animal model1.

In 1969, McKinney and Bunney were the first to propose criteria on external validity of animal models, mainly focused on affective disorders2. In 1984, Wilner simplified these external validations to three: predictive, face, and construct validity4.

These remain the most widely-accepted criteria for model validation, although many other proposals exist1-4,6. Although these three external validations were based on the psychiatric field of research, they can and should extend to any research where animal models are used. Of course, external validation does not occlude a scientist from internal validity (experimental design, reproducibility, randomization, control, etc.), which applies to all scientific research.

No Animal Model is Universal

An animal model may show a diverse outcome among the three categories of validation. Since no animal model perfectly replicates clinical conditions, no single model can show validity in all three criteria2. A model could have strong predictive validity but completely lack face validity, or vice versa.

Instead, these criteria provide a general external validation, the importance of which should be grounded in the purpose of the model. Understanding what validity a model can and cannot provide can be crucial for accurate preclinical assessment of novel therapeutic agents2,3,7. There is controversy in the ranked importance of the three criteria, mostly due to the divergence in their definition, but in general, predictive validity tends to hold the most weight1,2,4. This is especially true in preclinical drug discovery8. 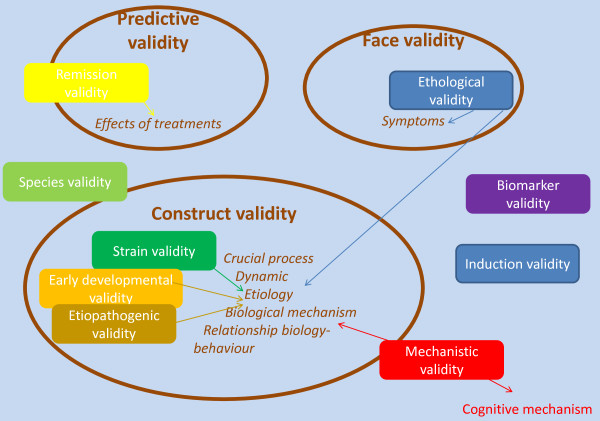 An overall schematic of Willner's proposed criteria with extended proposals by Belzung and colleagues. The added proposals and potential space they occupy within Willner's original criteria is shown in regards to the evaluation of the validity of an animal model. Figure from Belzung et al.2

Definitions of the three validity terms are vast. Here, we give a simplified explanation of each and give an example of a model that best represents that validity type:

In understanding the three terms, an investigator can assess how well a given animal model represents the human disease and the degree of therapeutic translation.

Although one model cannot perfectly recapitulate the clinical realm, the right combination of animal models that provide validity across the three generalized spectrums could get close. While the underlying disorder may limit access to all spectrums of validity regardless of the models employed, a multifactorial approach can generally be applied to all fields6.

Selecting the optimal combination of animal models depends on each of their external validities3,6. Dramatic improvements in animal model validity and translational significance have occurred in oncology, through the use of humanized models3, while many fields — such as neurodegenerative medicine — still struggle with translatability5,7.

Certainly, understanding and evaluating a model in the field of immuno-oncology is quite different from that of neurodegenerative disease. However, by understanding the general guidelines of external validation of an animal model, one can better evaluate the potential translational significance of the data generated in any field.