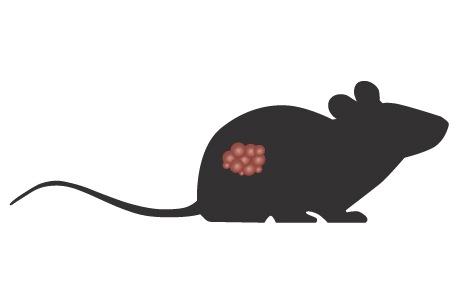 In a recent article in The Journal of Pharmacology and Experimental Therapeutics, Khot et al. examined the pharmacokinetics (PK) of exogenously administered T cells in a syngeneic tumor model. As immuno-oncology therapeutics expand into cell-based therapies, such as CAR-T cells, this type of research is needed to support their development. Khot et al. provide valuable insight into the PK of T cell-based therapeutics in this new paper.

The researchers used a syngeneic tumor model in which a mouse melanoma cell line (B16-BL6) was implanted subcutaneously into male C57BL/6NTac mice. One tumor-bearing mouse was sacrificed so T cells could be isolated from the spleen. These T cells were subsequently labeled with chromium-51 and injected intravenously into tumor-bearing mice. Tissues were collected at various time points after T cell administration, up to 14 days later. T cell biodistribution was measured by quantifying radioactivity in collected tissues1.

“...we have also presented the development of a PBPK model to characterize whole-body PK of exogenously administered T cells.”
–Khot et al.1
T cells administered to tumor-bearing mice were eliminated from the blood and lungs within a day after injection and accumulated in spleen and liver. According to the authors, "spleen, liver, lung, kidney, bone, and lymph nodes accounted for more than 90% of T cells in the body over the two weeks." The tumors contained only low amounts of T cells, which led the authors to question the utility of T cell-based therapies to treat solid tumors. A pilot study using administration of isolated tumor-infiltrating lymphocytes (TILs) returned a similar biodistribution of TILs as compared to T cells isolated from the spleen1.

The authors developed a mathematical, physiologically-based pharmacokinetic model to describe the observed T cell distribution. This model should be useful for scientists developing new T cell-based therapies, however more work is needed to understand how the distribution of specific T cell populations and tumor antigen-targeted T cells might vary.