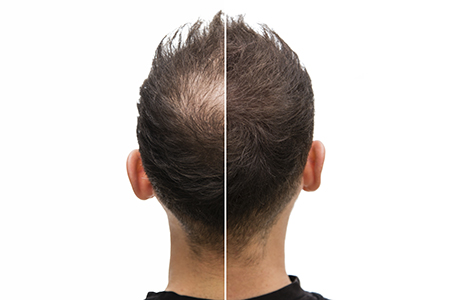 A recent article published in the Columbia Magazine highlights the work of researcher Angela Christiano and her radical solutions to addressing baldness. Dr. Christiano has been working on studies involving hair loss since 1996, with one of her most notable achievements being the discovery of a 'hairless gene' (HR) in 19981.

One of her recent advancements in this field has been the growth of human hair follicles on the skin of nude mice2. Nude mice, which lack a thymus and functional immune system, are essential tools for human xenograft and skin-related research studies.

What is a Nude Mouse?

Nude mice, in their various forms, contain a genetic mutation that results in the lack of a thymus and therefore a significantly inhibited immune system3. The genetic mutation is an inactivating mutation in the FOXN1 gene. Present in both mice and humans, the FOXN1 gene encodes for the transcription factor FOXN1, which is directly involved in the downstream regulation of other genes.

Some of the genes affected by FOXN1's activity are those relating to the development of hair follicles, the epidermis, and immune system. In 1994, it was shown that this mutation is the cause of the lack of visible hair in nude mice4.

Due to the immunodeficient nature of nude mice, they are used extensively in autoimmune disease, cancer, and inflammatory disease research. The absence of mature T cells prevents these mice from mounting many aspects of the adaptive immune response, making them excellent models for the engraftment of human tumor xenografts.

A frequently used model in oncology and skin disease-related research is the athymic NCr nude mouse, which is the standard athymic model used at the National Cancer Institute (NCI). Additional nude models exist: patient-derived xenografts of melanoma have been engrafted onto NMRI nude mice5 as well as models of cholangiocarcinoma onto BALB/c nude mice6.

Depending on the symptoms present, hair loss can result in patchy baldness (alopecia areata), pattern baldness (androgenic alopecia), or total baldness (alopecia totalis or universalis). These first three conditions below are the result of an autoimmune disorder where hair follicles are attacked by killer T cells. Androgenic alopecia is thought to be brought on by age, heart-related medical conditions, and hormonal imbalances.

When compared to the other forms of alopecia, androgenic alopecia is not caused by hair follicle dormancy after T cell attack, but rather the depletion of dermal papilla (DP) cells in the follicle itself. DP cells are multipotent stem cells that regulate hair growth and development, and without them the hair follicle is unable to produce new strands of hair9. The other forms of alopecia listed above have all been associated with a disruption in the human FOXN1 gene10,11.

Christiano and collaborator Colin Jahoda, a cell biologist from Durham University in England, began studies on hair follicle growth together over twenty years ago. Since then, they have successfully harvested hair follicles from human donors and grown them on nude mice.

To start, a small skin sample with hair follicles was taken from behind the ear of a patient and cultured with an artificial skin constructed in the lab. Once the constructs had formed capillary-like networks, each sample was engrafted onto the backs of nude mice, and human hair growth was seen in 4 - 6 weeks12.

While this research is in its preliminary stages, the growth of human hair outside of the human body is a novel innovation that could change the treatment landscape for baldness and hair loss.