With immuno-oncology (IO) scientists investigating the role of myeloid cells such as myeloid-derived suppressor cells (MDSCs) and tumor-associated macrophages (TAMs), a model with successful human myeloid cell engraftment is critical.

Several approaches have been explored to generate humanized immune system mice with myeloid cell engraftment, with the leading approach the generation of human cytokine transgenic models on super immunodeficient background strains. The three most commonly cited models are the NOG-EXL, NSG™-SGM3 and the MISTRG.

The NOG-EXL (hGM-CSF/hIL3-NOG) expresses human GM-CSF and IL-3 under control of the SV40 promoter on the NOG background, with cytokine expression levels in the range of ~35 pg/ml for hGM-CSF and ~80 pg/ml for hIL-3.2 It is commercially available pre-engrafted with human CD34+ stem cells as huNOG-EXL.

The NSG™-SGM3, also referred to as the NSGS, expresses three different human cytokines, GM-CSF, IL-3 and KITLG, on the NSG™ background. The transgene uses the relatively stronger viral CMV promoter and results in cytokine expression levels at supraphysiologic levels of ~2000-4000 pg/ml.1,3 It is commercially available pre-engrafted with human immune cells from the Jackson Laboratory.

The cleverly named MISTRG model is more complex than the first two. The base model is a Rag2/Il2rg double knockout on a mixed BALB/c x 12924 background. Because this strain background (as opposed to the NOD strain) is not optimally permissive to engraftment of human stem cells, a transgene expressing human SIRPα is added to improve hematopoietic stem cell (HSC) engraftment. Additionally, the model expresses human GM-CSF, IL-3, M-CSF and TPO. These cytokines are all under the endogenous mouse promoters except for hGM-CSF, which is under the human promoter.4

All three cytokine transgenic models described above successfully engraft human HSCs and develop human myeloid cells at levels higher than the comparison base immunodeficient models. Of the three models, the MISTRG is reported to engraft myeloid cells most successfully.

However, the MISTRG has been largely inaccessible by the humanized mouse community. The model was designed by Richard Flavell of Yale and made in collaboration with Regeneron Pharmaceuticals.4 The Jackson Laboratory imported the strain in 2015 in anticipation of distribution, but has since discontinued production of MISTRG mice.

Fortunately for the research community, both the NSG™-SGM3 and NOG-EXL are readily available to both academic and pharma/biotech researchers worldwide.

The developer of the NSG™-SGM3, James Mulloy, first reported in a poster at the 2013 American Society of Hematology meeting that the model develops anemia and bone marrow failure after human CD34+ HSC engraftment: "we found that NSGS mice developed a severe, eventually fatal anemia upon humanization with umbilical cord blood (UCB) CD34+ cells... Bone marrow sections from anemic mice clearly showed a general hypocellularity with abundant fatty tissue filling the majority of the intramedullary space."9

"We found that NSGS mice developed a severe, eventually fatal anemia upon humanization with umbilical cord blood (UCB) CD34+ cells."
Wunderlich, et al.9
Graft exhaustion was reported in NOD scid mice carrying the same cytokine transgene as in the NSG™-SGM3 in the first report on this transgene: "This suggests that the mechanism underlying this failure of primitive cell accumulation in the BM [bone marrow] was due to a direct effect of their exposure to excessive levels of human IL-3, GM-CSF and SF causing an increased probability of their differentiation and premature extinction (exhaustion)."1 It is thus not at all surprising that the NSGS would display a similar phenotype upon human HSC engraftment.

Wunderlich et al. reported that "Analysis of a large number of hu-NSGS showed that 100% of mice died between 10 and 27 weeks of engraftment, while all nonengrafted control mice remained alive and well."  10
Mulloy and coauthors followed up with a paper in 2016 characterizing the phenotype of humanized NSG™-SGM3 mice as "a severe, fatal macrophage activation syndrome (MAS) characterized by a progressive drop in rbc [red blood cell] numbers, increased reticulocyte counts, decreased rbc half-life, progressive cytopenias, and evidence of chronic inflammation, including elevated human IL-6. The BM becomes strikingly hypocellular, and spleens are significantly enlarged with evidence of extramedullary hematopoiesis and activated macrophages engaged in hemophagocytosis."10

Macrophage activation syndrome is a feature of several human autoimmune diseases, and thus humanized NSG™-SGM3 mice may be of interest for study of these disorders.

huNSG and huNOG mice can survive one year or more after engraftment, which is more than sufficient time for immuno-oncology studies. In contrast to that, the early-onset anemia and graft exhaustion seen in humanized NSG™-SGM3 mice is a challenge for immuno-oncology researchers, as it limits the useable study window. Wunderlich et al. reported that "Analysis of a large number of hu-NSGS showed that 100% of mice died between 10 and 27 weeks of engraftment, while all nonengrafted control mice remained alive and well."10

NSG™-SGM3 suffer from severe, progressive anemia and human immune graft failure.
For therapeutics which rely on human T cells, dosing should be initiated after T cells have fully entered the periphery, which is around 16 weeks post-engraftment, and continue for 30-60 days (to ~20-24 weeks post-engraftment). The useable lifespan of a humanized NSG™-SGM3 may thus not support that type of immuno-oncology study. 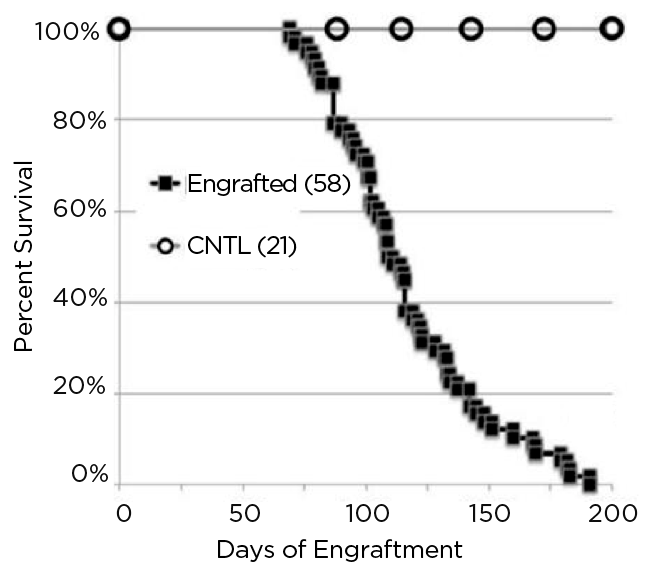 A poster presentation from the 44th Annual Scientific Meeting of the International Society for Experimental Hematology confirmed other reports of short lifespan in humanized NSG™-SGM3 mice. Yoshihara et al. from the Hyogo College of Medicine and the Columbia University Center for Translational Immunology reported that NSG™-SGM3 mice engrafted with human CD34+ HSCs, either with or without additional human thymus tissue, "had fatal outcome 18 to 22 weeks after transplantation" and described the phenotype as resembling hemophagocytic lymphohistiocytosis in humans.11

In contrast, while huNOG-EXL mice display a reduction in hemocrit over time, the vast majority never develop severe anemia.

Figure 4: Comparison of survival between huNOG-EXL and huNSG™-SGM3 (internal Taconic data and reference 10).

huNOG-EXL have been used extensively in IO drug discovery and development.

Scientists from Tesaro demonstrated significant anti-tumor activity with a novel anti-PD-1 (checkpoint inhibitor) antibody in huNOG-EXL mice implanted with A549 human lung cancer cells. Tumor infiltrating lymphocytes (TILs) were increased in tumors of mice treated with the therapeutic as compared to an isotype control.

In another study by Tesaro and Charles River, three different tumor types were implanted into huNOG-EXL mice, and various human lymphoid and myeloid cells were identified in those tumors.

NOG-EXL as a Preferred Host for Humanization

It's important to understand the performance of any immune system humanized model can be affected by properties inherent to the donor cells. Entire single donor lots can fail to engraft, and the rate of failures within a single donor lot (defined as <25% chimerism following humanization) varies across donors. For investigators seeking to minimize failed engraftments when establishing their own humanized mouse platform, NOG-EXL mice have beneficial properties.

CD34+ humanized NOG-EXL mice tend to have much lower rates of intra-lot failures compared to first-generation hosts such as NSG™ and NOG. In data from Champions Oncology, close to zero failed humanizations were observed when NOG-EXL mice were engrafted with stem cells from one of four donors. Lacking supporting human cytokines, similarly-engrafted conventional NOG mice resulted in some failures within all lots produced.12