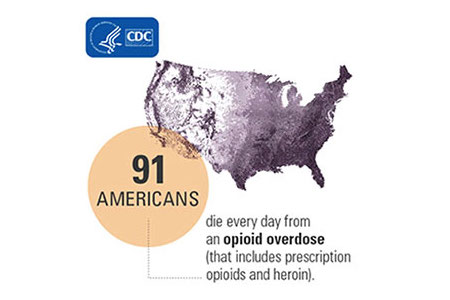 As the opioid crisis continues, every week brings new and alarming developments, legislative attempts to address the epidemic, and new formulations of street drugs which are contaminated, or resistant to naloxone.

This has sparked a variety of debates concerning how we can best address the situation. From a public health perspective, however, the need to explore relevant and predictive animal models of addiction and develop novel strategies for addiction and pain management is clear.

This is the first of a two-part series on the Opioid Crisis and the scientific exploration of addiction and pain management. Part One discusses animal models for studying addiction treatment. Part Two will address novel therapies for treating acute and chronic pain.

In 2015, 20.8 million people aged twelve or older in the United States had a substance use disorder1. That is a similar population to the number of Americans suffering from diabetes and more than 1.5 times the annual prevalence of all cancers combined (14 million)2,3.

In 2014, 47,055 drug overdose deaths occurred in the United States, 61% of which involved prescription opioids and heroin.

Heroin overdoses have more than tripled between 2010 to 20144. Anyone who takes prescription opioids can become addicted to them. In fact, as many as one in four patients receiving long-term opioid therapy in a primary care setting struggles with opioid addiction.

Once addicted, it is hard to stop5.

According to the Centers for Disease Control and Prevention:

The Disease Model of Addiction

"In the past two decades, research has increasingly supported the view that addiction is a disease of the brain7." Recent research helped to "define etiological factors and individual differences in the propensity to become addicted to drugs, leading to the description of addiction endophenotypes8."

"If neurobiology is to contribute to the development of successful treatments for drug addiction, researchers must discover:

"Animal studies are crucial in understanding the biology and pathophysiology of drug addiction and substance abuse. In contrast to clinical studies, the subject population can be controlled for variables more easily. Animal models often focus on the ability of the drugs to directly control the animal's behavior, an outcome that is consistent with the behavioral definition of addiction10."

Animal studies are critical in modeling the mechanisms of addiction in order to both prevent and treat disease. Models are generally developed to understand the reward versus risk behaviors, how substances act on the brain, and the level of mental and physical addiction. These models provide insights which allow for improved prescribing strategies, as well as produce therapies to treat active addiction and prevent relapse.

Another area of research involves novel, less addictive therapies for treating both acute and chronic pain, which we will explore in Part Two of this series.

"Modeling addiction in animals has focused on modeling different phases of the addiction process, such as drug initiation or acquisition, and on the factors that affect or predict vulnerability to drug addiction. In addition, interest is increasing in developing more comprehensive models that take into consideration more of the features that are characteristic of human drug abuse, that is, compulsive and binge patterns of use, loss of control over drug use, and chronic relapse10."

Rats and mice are by far the most common species used in studies assessing the antinociceptive effects of opioids11. "Rodent models, in particular, have shown that traits such as impulsivity and high sweet consumption, among others, are under strong genetic influence and positively associated with drug intake, similar to human populations12."

Conditioned place preference (CPP) has also been used to assess the potential abuse of drugs. This correspondence between self-administration and CPP appears to be particularly good for opioids. That is, opioids appear to be rewarding whether self-administered or passively injected during place conditioning11.

Both inbred and outbred mice and rats are used to study the development of addictive behavior, however inbred or transgenic models are usually more helpful in development of new therapeutics. There are model substrain differences in preferences for morphine and heroin, so selecting an appropriate model is crucial.

For many years, step programs and behavioral therapy — as well as campaigns like "Just Say No" and sheer willpower ("cold turkey") — were seen as the way to prevent and solve addiction problems. Medication Assisted Treatment (MAT) was viewed as a last resort, and carried the stigma that the addict was just substituting one drug for another and lacked the willpower to overcome addiction.

Science has proven that substance use disorder is a disease14 and that opioid use causes actual changes in the brain which can be managed with medication13,15. As with many diseases, medication plays a fundamental role in an effective treatment plan.

Modern MAT therapies help prevent relapse in recovering addicts by rewiring the brain to prevent the reward centers from fully responding to opioids.

MAT is commonly used in conjunction with other forms of treatment in opiate addiction. These medications relieve the cravings and symptoms of withdrawal that often lead to relapse. Substance Abuse and Mental Health Services Administration (SAMHSA) reports that medication-assisted treatments substantially improve the odds of successful recovery for people who misuse opioids, including heroin and prescription painkillers13.

Models of Relapse and Prevention

Models to understand the mechanisms of relapse are critical to developing new medications to assist in successful recovery.

"High rates of relapse to drug use during abstinence is a defining feature of drug addiction. In abstinent drug users, drug relapse is often precipitated by acute exposure to the self-administered drug, drug-associated cues, stress, as well as by short-term and protracted withdrawal symptoms. In this review, we discuss different animal models that have been used to study behavioral and neuropharmacological mechanisms of these relapse-related phenomena. The common models of relapse are models in which abstinence is achieved through extinction training, including the established reinstatement model, as well as the reacquisition and resurgence models. Relapse can be assessed in animal models after either forced abstinence or voluntary abstinence16."

Outbred models may be more appropriate for relapse models as it allows for greater variation in response to selected treatments than inbred models, thus more effectively mirroring the human population.

Trial a Taconic Animal Model for Quality and Compatibility Assurance:

2. Centers for Disease Control and Prevention, 2015.

20. Bardo, M & Bevins RA, Conditioned place preference: what does it add to our preclinical understanding of drug reward? R. Psychopharmacology 2000 153: 31-43.