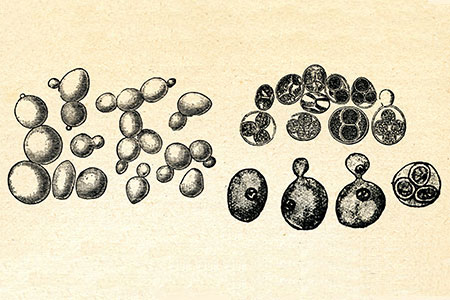 Inflammatory bowel disease (IBD) is a disorder of the gastrointestinal tract which includes Crohn's disease and ulcerative colitis. In general, the majority of studies looking at the role of the human gut microbiome have focused on bacterial members.

However, fungi are estimated to comprise 0.1% of the intestinal microbiota1, and elevated levels of anti-Saccharomyces cerevisiae antibodies (ASCAs) have been detected in the serum of Crohn's disease patients, suggesting a role for fungi in the pathogenesis of IBD2,3.

In a recent Science Translational Medicine publication, Chiaro et al. demonstrates the role of one member of the gut mycobiota in exacerbating a mouse model of colitis4.

Fungi in a Mouse Model of Colitis

To determine a potential role for fungi in IBD, Chiaro et al. started their investigation by administering either S. cerevisiae, one of the most commonly detected fungi in the human GI tract, or another common environmental fungus, Rhodotorula aurantiaca, by oral gavage before utilizing chemical models of colitis.

Following induction of colitis the authors found that mice treated with S. cerevisiae, but not R. aurantiaca, most consistently developed worsened disease as measured by enhanced epithelial damage, greater crypt loss, and increased cellular infiltration. Aggravated colitis was only observed when live, not heat-killed, S. cerevisiae were administered, suggesting a role for metabolically active yeast. Interestingly, their findings did not support a role for an increased inflammatory response.

To further address the mechanism(s) behind the exacerbated disease phenotype, germ-free mice were monoassociated with either S. cerevisiae or R. aurantiaca before inducing colitis with dextran sodium sulfate (DSS).

To test the effects of elevated uric acid directly, they administered uric acid to mice through oral gavage until fecal uric acid levels were comparable to those observed during S. cerevisiae monoassociation in germ-free mice.

Finally the authors demonstrated that administration of allopurinol, an inhibitor of uric acid production5, significantly reduced the severity of colitis in S. cerevisiae-colonized mice as compared to untreated, colonized mice.

This study effectively demonstrated the role that one member of the gut mycobiome can have in modulating the severity of a mouse model of colitis. Given the relative paucity of microbiome studies focused on fungal members this study should remind researchers that other members of an organism's microbiota, including viruses and protozoans, can have dramatic effects on mammalian physiology.