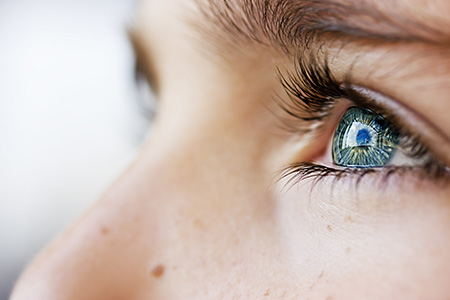 Anthony St. Leger and colleagues from the National Eye Institute at the National Institute of Health (NIH) recently published evidence that the ocular microbiome plays an important immunological role1.

The surface of the human body is colonized by a diverse community of microorganisms, and the eye is no exception. Yet the ocular surface contains relatively few bacteria, approximately 150-fold fewer than the mouth2. Many questioned whether an ocular microbiome even existed. While we now know the human eye possesses a unique microbiome, consisting of only a few dominant organisms (largely Corynebacteria, Propionibacteria, and Staphylococci)1, almost nothing is known about how this microbiome influences ocular health or disease.

Evidence for a Role in Ocular Immunology

St. Leger and their colleagues identified a specific bacteria, Corynebacterium mastitidis, that was present as an ocular commensal in mice from their institution, but not in vendor-supplied mice.

C. mastitidis is a Gram-positive rod-shaped bacteria that was originally isolated from the milk of sheep with udder inflammation (mastitis), but has since been identified in mice, and a closely-related Corynebacterium has been found in the human eye1,3,4,5. It is unclear how the C. mastitidis colonization was established within the NIH colony, but its existence within other research institutes is possible1,4.

They showed that C. mastitidis plays an immunoregulatory role by inducing a specific population of γδ T cells, leading to neutrophil recruitment and the production of antimicrobial peptides. It also appeared that C. mastitidis was protective against several different eye infection models.

For the first time, this study identified the role of a specific commensal bacterium in regulating ocular immunology and protecting against pathogenic infections.

C. mastitidis was not identified in vendor mice, including those from Taconic Biosciences, suggesting that increased bioexclusion practices can prevent C. mastitidis colonization.

Although St. Leger, et al. showed that they could directly inoculate C. mastitidis-negative mice with this organism (both germ-free and SPF recipients) and that it was passed from mother to offspring, co-housing mice alone was not sufficient to spread C. mastitidis between animals. Since Corynebacteria can also be present in breast milk3,6, it is plausible that lactation may be a potential route for transmission between mice, and provides an important caveat for co-housing and cecal/fecal transplant methods for colonization with commensals that require specific conditions for transfer.

Increasing Interest in the Ocular Microbiome

Microbiome studies most often examine the gut and the skin, which is understandable given the large bacterial load of these sites. Nevertheless it is becoming clear that the microbiome plays an important role in other body sites.

The eye is a complex organ and many ocular diseases are either idiopathic or have few treatment options. Could the microbiome hold the key to a better understanding of ocular disease?