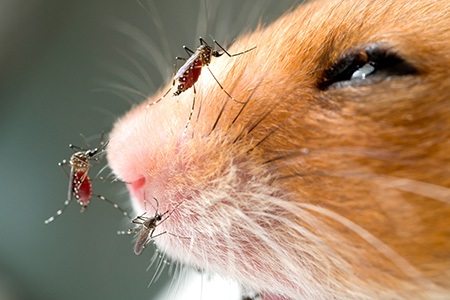 Malaria is a serious global health hazard, with 214 million new cases worldwide in 2015 according to the World Health Organization. Infection by Plasmodium species can result in a range of disease severity, from asymptomatic infection through severe disease and death. A comparison between mouse models of malaria from competing vendors appears to have identified components of gut microbiota which may impact disease severity, including two genera that may have a protective role in malaria infection.

Researchers at the University of Tennessee and University of Louisville made the connection when comparing malaria disease progression in C57BL/6 mice from different vendors. They identified differences in parasitemia after infection with P. yoelli or P. chabaudi. Mice from Taconic and the Jackson Laboratory (JAX) were resistant to infection, whereas mice from Envigo (formerly Harlan) and the National Cancer Institute (NCI) were susceptible.

Expanding those results to another inbred strain, BALB/c mice from Taconic and JAX displayed lower parasitemia after infection with P. yoelli compared to BALB/c mice from Envigo and Charles River Laboratories.

Analysis of the gut microbiome showed differences in mice from Taconic, JAX, NCI, and Envigo. At the family level, resistant mice from Taconic and JAX were proportionally higher in Clostridiaceae, Erysipelotrichaceae, Lactobacillaceae, and Peptostreptococcaceae, whereas susceptible mice from Envigo and NCI were proportionally higher in Bacteroidaceae, Prevotellaceae and Sutterellaceae. Lactobacillus and Bifidobacterium were further identified as key biomarkers for susceptibility, with those organisms overly abundant in resistant mice from Taconic and JAX.

To evaluate potential therapeutic applications of the microbiome findings, the researchers treated resistant JAX mice and susceptible NCI mice with antibiotics followed by yogurt supplemented with probiotics containing Lactobacillus and Bifidobacterium and then infected them with P. yoelli. This paradigm reduced parasitemia in the otherwise-susceptible NCI mice. Lactobacillus and Bifidobacterium may thus have a protective role in malaria infection.

With over 400,000 malaria deaths in 2015, including over 300,000 children under five years of age, the Bill & Melinda Gates Foundation is focusing on a strategy of global malaria eradication. Until that goal is reached, a simple probiotic solution to lessen disease burden would be an excellent addition to the global malaria control toolbox.