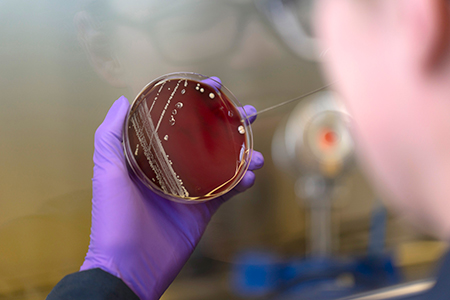 The gastrointestinal tract represents the largest reservoir of microbes within the body, with the colon possessing up to 70% of all the microbes of an individual's microbiome1. Researchers have long known that the gut flora can impact a drug's therapeutic activity, a phenomenon seen as early as the 1930s with regard to bioactivation of sulfa class antibiotics2. While it's known that the microbiome may increase drug activity, it is also well documented that microbial biotransformation of drugs can inactivate therapeutics and lead to the accumulation of toxic metabolites (as reviewed in Enright et al.3).

Oral administration of the cardiac drug digoxin is a well-known example4. About 10% of patients given digoxin don't respond to the drug because their gut flora converts it to an inactive form; conversely, ablating these microbiota using antibiotics reverses the effect. A single bacterial genus, Eggerthella, was found to be responsible for this biotransformation5.

Studies such as these continue to demonstrate several key points with regard to the microbiome's impact on disease and treatment: gut microbes can alter orally administered drugs; the microbiome's variability across individuals can affect drug efficacy; and there is great potential to leverage the microbiome in the development of effective therapeutics.

The Utility of Mouse Models in Microbiome Research

Researchers increasingly turn to mouse models to understand the microbiome's role in disease and treatment, due to factors like the homogenous genetics of a mouse, the availability of various suitable model types (including germ-free, mutant and/or transgenic models), a comparable physiology with humans, and the low cost of performing studies with rodents.

However, when using mouse models to study the microbiome's effects it is important to keep in mind that gross anatomy, compositional differences of the gut microbiota between humans and mice, and environmental factors may impact translatability. For example, 85% of the genera found in the mouse gut is not shared with humans6; but 80 genera are shared between the species7.

Germ-free mouse models can help bridge the gap in compositional differences between mice and humans, since they're able to recapitulate a large part of the human gut microbiota composition (100% of phyla, 11/12 classes and ~88% of genus-level taxa)8 following fecal microbiota transplantation (FMT)8. This is one reason germ-free mice are often associated with human gut microbiota, then used in studies on the microbiome's effects on both existing drugs and drug candidates.

Therapeutics that target the immune checkpoint inhibitor pathways — including anti-PD-1 drugs like Keytruda® (pembrolizumab) and Opdivo® (nivolumab) and anti-PDL-1 drugs like Tecentriq® (atezolizumab) — have proven highly effective in a subset of cancer patients. However, in other patients these therapies have demonstrated limited or no effectiveness.

To better understand this discrepancy in anti-tumor response, researchers have considered whether the patient's microbiome was a factor. Across several studies, the compositional and functional features of the gut microbiota have been found to differ among patients who responded to these immunotherapies vs. those who did not respond. Additionally, using mouse models transplanted with human microbiota, investigators working on three separate studies demonstrated translational microbiome effects on oncology treatments.

In the same study, investigators then transferred stool samples from both responder and non-responder patients into germ-free mice via FMT. Germ-free mice that received responder gut microbiota in combination with an anti-PD-1 treatment demonstrated an anti-tumor response, while those that received non-responder stool samples did not see an improved anti-tumor response. The investigators also observed that a positive clinical response was correlated with the presence of Akkermansia municiphila. When non-responder microbiota was supplemented with A. municiphila and transplanted into germ-free mice, increased effector T cells were observed within the tumor microenvironment and the efficacy of the anti-PD-1 treatment improved.

Researchers at the University of Texas M.D. Anderson Cancer Center explored the impact of the microbiome on melanoma patients treated with an anti-PD-1 therapy and found a correlation between a positive response to the immune checkpoint inhibitor and the diversity and composition of the patient's gut microbiota10. Specifically, those with low levels of Faecalbacterium and high levels of Bacteriodales had shorter progression-free survival.

Next, these investigators used a germ-free melanoma mouse model to assess the impact of the microbiome on immune checkpoint inhibitor efficacy. Mice that received FMT from responder patients displayed enhanced systemic and anti-tumor immunity, which was similar to the response observed in the FMT donors. These mice also exhibited more CD8+ T cells, known to play a role in killing melanoma cells.

A University of Chicago study also demonstrated the microbiome's impact on anti-tumor immunity. The researchers analyzed the microbial composition of melanoma patients prior to administering an anti PD-L1 treatment11 and found a significant association between the patient's stool microbial composition and their response to the treatment. Specifically, improved clinical outcomes were associated with higher levels of Bifidobacterium longum, Collinsella aerofaciens, and Enterococcus faecium. Further testing this hypothesis in germ-free mice, the investigators found that the anti-PD-L1 treatment was only effective in germ-free mice that received FMT from responder patients and not in those that received samples from non-responders.

Preclinical and Clinical Evaluations Take Off

Dr. Alexander Maue, scientific program manager, authored an article on the microbiome's impact on drug efficacy in International Biopharmaceutical Industry:
Fueled by strong evidence that the microbiome can impact both disease progression and treatment, a number of microbiome-based therapeutics are now undergoing preclinical and clinical evaluations with a goal of advancing investigators' understanding of how the microbiome contributes mechanistically.

At the University of Calgary, a group of researchers found that three bacterial species enhanced immune checkpoint inhibitor efficacy in mouse models of colorectal cancer, bladder cancer, and melanoma. The effect was caused by the production of the metabolite inosine, which was found to modulate response to the immunotherapy13.

The microbiome's role in disease development, progression, and treatment is complex and will undoubtedly require continued study to fully understand. Given that the US Food and Drug Administration (FDA) issued a safety alert in 2019 on the use of unapproved FMT, the research community should expect to see an increased focus on developing defined bacterial consortia as disease treatments. Having already demonstrated their utility in microbiome-based research, mouse models — including germ-free mice — will prove an essential tool in support of these and other endeavors designed to advance future discoveries that leverage the microbiome.