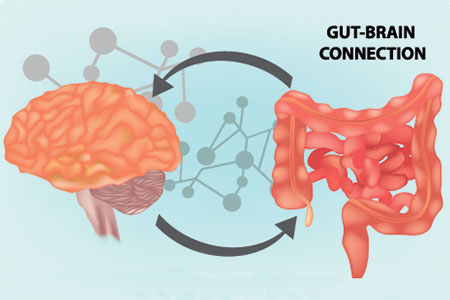 New research is regularly being published on the connection between the gut microbiome and the central nervous system (CNS) — together known as the gut-brain axis. Alterations in the composition of intestinal microbiota have also been associated with antibiotic use and the progression of infectious diseases.

What is the Gut-Brain Axis?

The gut-brain axis, also known as the microbiota-gut-brain axis, represents the bidirectional biochemical signaling and communication between the intestines and brain1. This system includes the gut microbiome and central nervous system (brain and spinal cord)2.

The vagus nerve is the longest nerve of the autonomic nervous system, beginning at the brain stem and extending to multiple organs before terminating at the colon. Due to the length and composition of this nerve, it can sense metabolites generated by microbial species in the intestines and transmit this information to the CNS, which results in a physiological response3.

As evidenced by a study published in Science Translational Medicine in 2018, misfolded α-synuclein proteins characteristic of the Lewy bodies in Parkinson's disease have been found in the appendix as well as the brain4. Additionally, Ulusoy et al. demonstrated in mouse models that α-synuclein fibers, once injected into the brain, can traverse through the vagus nerve into the stomach and gastrointestinal tract5.

Factors Influencing the Composition of the Gut Microbiome

The main phyla of bacteria that commonly exist in the gut microbiome are Actinobacteria, Firmicutes, Bacteroidetes, Proteobacteria, and Verrucomicrobia. It is estimated that 3.8x1013 bacterial cells reside inside the intestinal tract, comprising up to 2% of an adult human's body weight6,7. It is well-established in both animal and human studies that diet can significantly influence the composition and general health of the microbiome. Additionally, six common factors influence the microbiome in infants, setting them up for the rest of their lives with a "base" composition of gut microbiota8:

While vaginal births have been shown to expose the infant to the mother's vaginal bacteria, new studies on vaginal versus cesarian births have questioned this9. What is not in question, however, is that breast milk contains roughly 40% of beneficial bacteria that will reside in an infant's intestinal tract10.

Additionally, the influence of antibiotics on an infant's microbiome has been studied by multiple groups. Studies conducted in mouse models mimicking pediatric antibiotic use have shown that increased levels of antibiotic use lead to a disturbance in the composition of levels of commensal bacteria lasting for up to a few months11. Additionally, studies in children who had been prescribed antibiotics for infections early in life had much less diverse microbiomes than children who had never taken antibiotics12.

How the Gut Microbiome Influences Depression

A recent article published in Nature microbiology proposes a connection between gut microbial metabolism and depression. The researchers involved in this project re-analyzed data originally produced as part of the Belgian Flemish Gut Flora Project to produce their results. This project was a large-scale study conducted in 2016 aimed at analyzing the fecal microbiome in 1,054 participants. After re-analyzing the data through a module-based framework, the researchers found that butyrate-producing bacteria such as Faecalibacterium and Coprococcus were associated with a more positive mental state. Additionally, lower-than-normal levels of the bacteria Dialister and Coprococcus spp. were associated with higher levels of depression in the patients they obtained the samples from13.

Depending on the species of bacteria, different metabolites are produced through their regular biochemical processes. Some of these metabolites can influence molecules that regulate communication to the CNS. These include short-chain fatty acids such as butyrate, neurotransmitters (serotonin, GABA), hormones (cortisol), and immune system modulators such as quinolinic acid. Several microbial species, specifically the γ-aminobutyric acid-producing bacteria, were shown to positively correlate with a less depressive mental state.

While this study does not comment on the directionality of the transfer of metabolites through the gut-brain axis, it does lay the groundwork for specific associations of mental health and commensal bacterial composition.

This paper adds to the ever-increasing evidence that the microbiome is involved in many conditions not limited to the intestines in which they reside.