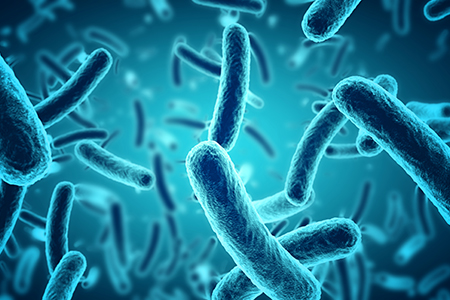 In the last few months, multiple bacterial species have been making headlines. This review will outline three types of bacteria and how specific strains may prevent or encourage the development of bacterial infections.

The strain that is undoubtedly the most familiar to the general public is E. coli. Once again, romaine lettuce has been abandoned by supermarkets and restaurants as per advice from the Centers for Disease Control and Prevention (CDC). However, not all strains of E. coli are harmful; in fact, certain strains may help protect us from pathogenic bacteria that enters our gut microbiota.

E. coli — most commonly known for causing food poisoning and gastrointestinal upset — is a gram-negative bacteria part of the Enterobacteriaceae family. While E. coli can survive inside the human intestine without causing harm, certain strains of this bacteria are found in spoiled foods or undercooked meat. It is, of course, responsible for the most recent outbreak in romaine lettuce as well as the outbreak that occurred earlier this year, hospitalizing ninety-six and killing fifteen.

The E. coli strain involved in both outbreaks is the same — O157:H7 — which means the source of contamination was not properly eliminated after the first outbreak1.

E. coli in the Microbiome

However, harmless strains of E. coli are part of the normal human microbiome in the gut and regularly produce vitamin K2, which is essential for synthesizing proteins involved in blood coagulation2,3. A study published in 2001 demonstrated that E. coli strains EM0 and JM105 placed in the gut of germ-free mice resulted in an increase in survival rates post-infection with Salmonella when compared to the control group4. Additionally, the "Nissle 1917" strain of E. coli is a nonpathogenic strain frequently used as a probiotic. In patients suffering from ulcerative colitis — a chronic inflammation of the lower gastrointestinal tract — Nissle 1917 was used to maintain remission in patients who had previously been suffering from the condition.

The mechanism of actions specific to this strain of bacteria include the release of compounds with immune-modulatory properties and inhibitory effects towards other pathogenic E. coli5.

Clostridium difficile (C. diff) is a species of Gram-positive, spore-forming bacterium that is most commonly associated with infections found in hospitals and nursing homes.

When patients receive antibiotics for other bacterial infections, it is common to eradicate most of the bacteria in the body — including the helpful bacteria in the gut microbiome. By eradicating most bacteria from this environment, C. diff populations can grow and spread without spacial or chemical resistance. However, recent cases are appearing in individuals that have not endured a course of antibiotics.

According to CDC research scientist Dr. Alice Guh, there is growing evidence that changes in diet and increasing the use of certain medications might be responsible for disrupting the composition of the microbiome6-9. A study published in Nature in March evaluated the effects of non-antibiotic medications on the gut microbiome. In 25% of the 1,000 cases antimicrobial activity was observed, proposing a new mechanism for disrupting the microbiome and encouraging pathogenic bacterial growth10.

A recent study in Science Translational Medicine demonstrated that several strains of bacteria are becoming "more tolerant" to common alcohol-based hand sanitzers11. Instead of the bacteria becoming resistant to alcohol, the bacteria tested were able to survive for longer periods of time after being treated with the sanitizer. Most hand sanitizers found on the shelf and in common spaces are 60% isopropyl alcohol.

Samples of the specific bacteria Enterococcus faecium were obtained from hospitals between the years 1997 and 2015 for testing with varying concentrations of alcohol. E. faecium is generally a non-pathogenic bacteria, but has been increasingly associated with hospital-acquired infections since 200712.

After testing the samples with alcohol concentrations from 23% up to 70% isopropanol, the researchers discovered that samples obtained after 2010 were up to ten times more tolerant to the higher percentages of alcohol. Genomic studies further confirmed that certain genes were mutated in the samples of E. faecium with increased tolerance to isopropanol.

Bacteria will always exist in our environment, on our skin, and in our bodies. Investing in research studies aimed at combating antibiotic resistance and understanding the effects of bacterial interactions on the microbiome is of paramount importance to our society.

While the romaine-associated E. coli outbreak is due to improper growth and storage conditions, it is always critical to remember that bacteria live on all surfaces we come into contact with. Proper handwashing and food safety techniques are needed to stay free of foreign pathogens.