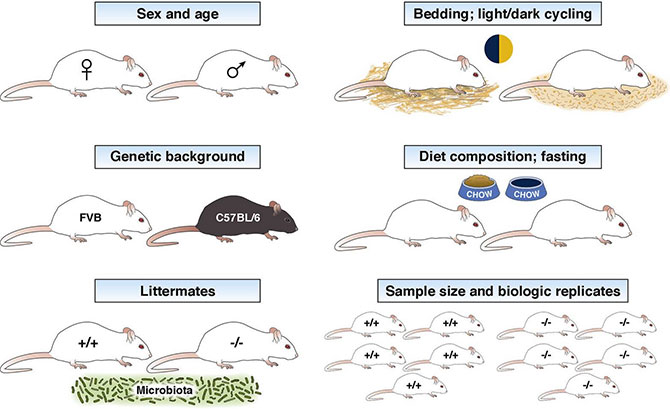 Image source: Not All Mice Are the Same: Standardization of Animal Research Data Presentation5.

ARRIVE is a set of publication guidelines developed in consultation with researchers, statisticians, journal editors, and funding agencies, consisting of a twenty-point checklist of essential information to include in publications reporting animal research. ARRIVE has been widely accepted by the scientific community as a vital tool for improving the reproducibility and ethical standards of animal studies.

More and more journal editors require or encourage their independent reviewers to use the ARRIVE guidelines as a checklist when performing peer review.

When ARRIVE was published, the microbiome was not recognized as the important variable in animal studies as it is today. Under a section dealing with report of Baseline Data, the guidelines do mention reporting of the microbiological status of the animals before treatment or testing, but it is not further elaborated if this refers to a full microbiological profiling or merely the exclusion of pathogenic and opportunistic organisms (e.g. as specified by FELASA3).

Despite general acknowledgment as the "right path", non-compliance with the ARRIVE guidelines is still a widespread problem4. One part of the problem is the extensive nature of the ARRIVE checklist, which may be overwhelming. Further, not all of ARRIVE's parameters fully apply to many manuscripts5.

A "minimum checklist" was therefore proposed in 2016 by editors of several different journals, focusing researchers on the most critical factors for ensuring transparency and reproducibility5. These editors, representing Gastroenterology, Hepatology, Gut, Journal of Hepatology, and Cellular and Molecular Gastroenterology and Hepatology, also added the microbiome as a variable, which was not emphasized when ARRIVE was developed.

The "minimum checklist" consist of the following information — most of which was also mentioned in ARRIVE, but here reappears in a condensed form, emphasizing factors that influence or are influenced by the microbiome:

PREPARE before you ARRIVE

ARRIVE was developed to help scientists write up their research for publication and to assist journal editors and reviewers in the peer review process. As a prequel to the ARRIVE guidelines, the PREPARE guidelines (Planning Research and Experimental Procedures on Animals: Recommendations for Excellence) were very recently published (August 2017) by Norecopa, the 3R center of Norway.

The PREPARE guidelines focus on the planning phase of studies and complement ARRIVE "in three broad areas which determine the quality of the preparation for animal studies: formulation, dialogue between scientists and the animal facility, and quality control of the various components in the study6."

As such, the PREPARE guidelines help scientists plan their experiments in a way that reduces waste and increases the reproducibility of animal research and testing. PREPARE does not currently mention the microbiome, but the authors state that new resources will be added to PREPARE as they are developed. Their aim is that "PREPARE will be a living and dynamic set of guidelines which mirror developments in best practice within the field of research animal science and 3R-alternatives." With the current appreciation of the microbiome as a variable in in vivo studies, we might soon see accounting for and reporting of the baseline microbiome appearing on more checklists for preparing and reporting in vivo studies, like the ones cited here.

Read the Other Related Taconic Insights About the 3Rs: