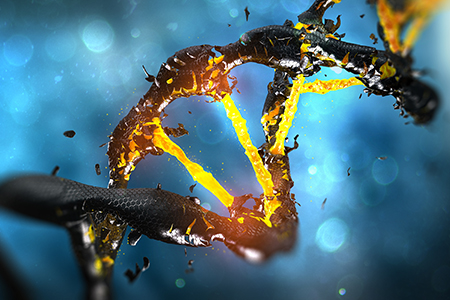 Oxidative stress is defined as "a disturbance in the balance between the production of reactive oxygen species (free radicals) and antioxidant defenses1". Long term oxidative stress on cells has been shown to be a key promoter of the development of disease; particularly cancer, diabetes, atherosclerosis, neurodegenerative disorders, hypertension, stroke, and arthritis2.

Many cellular processes are negatively affected by increased oxidative stress, one, in particular, being the iron response element stem-loop (IRE) and regulation of iron-dependent proteins. The role of the IRE in cancer has been elucidated by multiple groups, particularly the binding affinity to its protein in response to either hypoxic stress experienced by tumor cells or by the reprogramming of iron metabolism.

High levels of iron have been shown to expedite tumor formation by creating peroxides and free radical species. Possibly the most relevant discovery has been the observation that iron response element binding proteins (referred to as IRBP or IRP) — thought only to function as iron response regulators — could have regulatory functions that contribute to tumor progression in ways that are independent of their primary roles3.

How Iron is Regulated in the Body

Iron is an essential mineral for the proper functioning of many cellular processes, especially hemoglobin, the protein that carries oxygen from the lungs to the tissues. The intake of iron into cells is a tightly regulated process that ensures a balance of stored iron and free iron in the cytosol.

There are essential "key players" that help maintain these regulatory pathways:

The effect of oxidative stress on iron regulatory pathways could be quite variable. Increased reactive oxygen species (ROS) inside the cell destabilizes the iron-sulfur cluster and can contribute to IRBP degradation, suggesting an interaction between iron management, metabolic activity, and ROS levels.

It has also been reported that increased levels of peroxide stimulate the binding IRBP to the IRE located in ferritin mRNAs7.

Iron-related Oxidative Stress and the Development of Cancer

While iron is essential to maintaining homeostasis, its nature as a transition metal enables it to generate reactive oxygen species. This results in oxidative stress which can mutate genomic DNA, thereby activating oncogenes and promoting the development of cancerous cells.

When iron is taken in in excess, or when the regulatory pathways that store and use iron do not function properly, iron can accumulate in the liver and kidneys, resulting in cancers of those specific organs. Recently, a study was published in PLoS One that studied the incidence of lung cancer and relationship to serum levels of iron. The researchers found that in patients with lung cancer, the serum levels of iron were significantly higher, along with the concentration of ferritin — the storage protein mentioned above. This could indicate the excess iron stored within cells as well as present in the serum and extracellular space may be a contributing factor to the progression of lung cancer11.