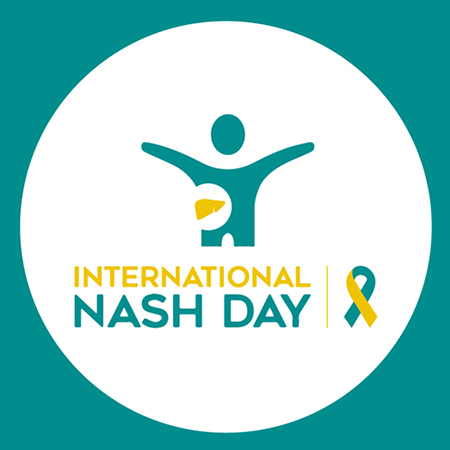 The second annual International NASH Day took place on June 12, 2019. This day of action was launched last year to bring awareness to the global epidemic of NASH (nonalcoholic steatohepatitis). A coalition of worldwide organizations supported this effort including the American Liver Foundation, the Global Liver Institute and the NASH Education Program.

According to a press release from the American Liver Foundation, "Millions of Americans are at risk of developing a potentially deadly liver disease and they don't know it. It's called non-alcoholic fatty liver disease (NAFLD) and its more severe form, non-alcoholic steatohepatitis (NASH), can lead to cirrhosis of the liver, liver cancer and increased risk of cardiovascular events." The American Liver Foundation featured a range of excellent educational materials on this emerging health threat, including videos and an infographic.

Nearly 60 NASH Day events took place worldwide, across North and South America, Europe and Asia, including conferences, presentations, patient symposiums and other educational efforts. The NASH Education Program hosted two conferences, one in New York and the other in Brussels. Video replays are available for both events. The Health Policy Partnership released a new policy report on NASH in Europe and the Middle East.

The focus of NASH Day was awareness among both the general public and at-risk populations. Early intervention is critical as there are no approved drugs to treat NASH, and disease progression can include liver failure and liver cancer. As noted by the American Liver Foundation, "NASH is potentially reversible and early diagnosis can lead to meaningful interventions through diet, nutrition and exercise. There are currently no approved treatments available for NASH."

While public awareness has lagged, research on NASH has been progressing. However, the Global Liver Institute notes that "Despite its prevalence, NASH only accounts for 0.42% of the total budget of the National Institute of Diabetes and Digestive Kidney Diseases (NIDDK), the unit within the National Institutes of Health that houses a majority of liver health research." NASH has multiple aspects such as hepatic fat accumulation, inflammation and fibrosis, and thus preclinical research uses a variety of animal models to represent these disease attributes, including diet- and chemically-induced models. Research is directed not only towards the development of therapeutics for NASH, but also towards new diagnostic methods, as the gold standard of liver biopsy is very invasive. Less invasive, more widely available methods are needed to identify those patients who would benefit from immediate intervention.

Learn more about the Taconic Biosciences' model supporting this field of research:

Liver Biopsies in a Mouse Model of NASH