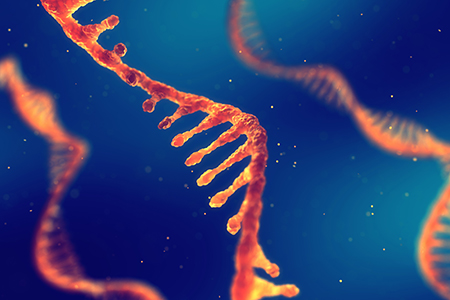 RNA-based therapeutics are a relatively new class of drugs based on RNA sequences. There are three main classes of RNA therapeutics: small interfering RNA (siRNA), RNA aptamers, and ribozymes.

Last year, the first siRNA-based therapeutic was approved by the FDA. The drug, called ONPATTRO® (patisiran), developed by Alnylam Pharmaceuticals, aims to treat peripheral nerve disease caused by hereditary transthyretin-mediated (hATTR) amyloidosis in adults1,2. This drug has proven effective in treating nerve function and clinical trials are underway for more RNA-based therapeutics. Much like most new therapeutics, initial preclinical studies were conducted in animal models. Both rabbits and rats were used for fertility and developmental studies, while the transgenic rasH2 mouse was used for carcinogenicity studies3.

The difficulty with creating an RNA therapeutic is that, unlike DNA and proteins, RNA is very easily degraded by nucleases both inside and outside of the cell. This results in the need to develop new delivery mechanisms for these types of nucleic acids. Additionally, RNA therapeutics may have off-target effects, resulting in gene silencing that is unintentional4. This Insight will review the latest developments in siRNA-based therapeutics.

What are Short Interfering RNAs (siRNAs)?

Short interfering (also called small interfering) RNAs (siRNAs) are naturally expressed RNA molecules that are involved in gene expression regulation through the RNA interference pathway. They are short, double-stranded nucleic acids that are part of the non-coding RNAs (ncRNAs) in the cell.

First discovered in 1999 by Dr. David Baulcombe's group at the Sainsbury Laboratory in Norwich, England, siRNAs were determined to be post-transcriptional gene silencing agents in plants5. Shortly after, RNA researcher Dr. Thomas Tuschl showed that these short duplex sequences can specifically inhibit the expression of endogenous genes in human embryonic kidney 293 (HEK293) and HeLa cells6.

Unlike protein-coding messenger RNA (mRNA), siRNAs typically exist in duplex prior to processing. The enzyme known as dicer then cleaves the stem-loop joining the two strands, thereby allowing the two strands to separate. The more thermodynamically stable sequence is then recruited to the RNA-induced Silencing Complex (RISC) (Figure 1).

Whether siRNAs are created inside the cell or delivered into it, the mechanism of action for silencing a gene is the same.

First, the siRNA must be complementary to a 20-24 base pair long target region on an mRNA that has been selected for degradation. The siRNA is then complexed with multiple other proteins, forming a ribonucleoprotein complex known as the RISC. Together, this complex cleaves the target mRNA, thereby preventing the message from being translated into additional proteins. This system is known as RNA interference (RNAi) and is a key process in gene silencing.

Some key challenges when it comes to delivering siRNA into the human body are intracellular delivery, stability, and associated off-target effects.

Local delivery of an siRNA into ocular tissues was the first method of delivering an RNAi-based therapeutic to enter clinical trials. Since then, multiple new delivery mechanisms are also being explored.

Chemical modifications to siRNAs improve their resistance to degradation, create higher target specificity to counter off-target effects, and overall improves the chances of gene silencing through RNAi7. Another method of delivery involves encapsulating the siRNA in viral vectors, polymers, liposomes, and nanoparticles.

The main goals of utilizing these structures are to protect the RNA molecule, increase time it can exist in the circulation without being degraded, and target the encapsulated sequence to specific tissues or cell types8.

There are currently fifteen active RNAi-based therapeutics in varying stages of the clinical trials process. Some of the conditions associated with these trials are hemophilia A and B, hepatitis B, leukemia, kidney disease, pancreatic cancer, and atherosclerotic disease.